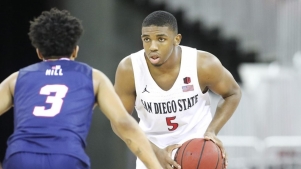 Matt Mitchell and Terrell Gomez scored 13 apiece for the Aztecs (17-4, 11-3 Mountain West), whose tight defense frustrated the Bulldogs most of the night.

Schakel was 5 for 5 from the field, including 4 for 4 on 3-pointers. Gomez was 3 for 3 from behind the arc. SDSU was 8 for 12 on 3-pointers and shot 61% overall from the floor.
Deon Stroud scored 17 and Orlando Robinson 16 for Fresno State (9-9, 7-9).
San Diego State opened with a 9-0 run and notched another dominating win in its streak. Its average margin of victory in the eight games is 26.4 points.
The Aztecs' defense was particularly impressive in the second half. Schakel had a steal and layup for a 52-34 lead and Mitchell later had a steal and layup for a 57-36 lead.
Keshad Johnson had two impressive slam dunks in the second half.
Schakel was 4 for 4 from behind the arc for 12 points to help SDSU take a 36-26 halftime lead. He hit two 3-pointers in the opening minutes during SDSU's 9-0 run.
SDSU had a 21-8 lead before Fresno State went on a 10-0 run, keyed by 3-pointers by Stroud and Leo Colimerio to pull within three.
BIG PICTURE
SDSU: The Aztecs have been dominant in sweeping four straight MWC series. They haven't trailed in the second half of any game and their closest margin was a 14-point win against the Bulldogs on Thursday night.
UP NEXT
San Diego State hosts MWC leader Boise State on Thursday night in the opener of a two-game series.
Box
Postgame notes