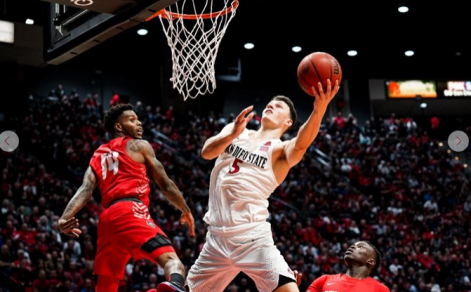 February 12, 2020 (San Diego) - Junior forward Matt Mitchell had 22 points and 12 rebounds for his first double-double and scored his 1,000 career point for No. 4 San Diego State, which beat New Mexico 82-59 Tuesday night to win the Mountain West Conference championship and remain the nation's only undefeated team.

Yanni Wetzell added 20 points and nine rebounds for the Aztecs (25-0, 14-0 MWC), who clinched at least a share of the title in the first half when Utah State beat Colorado State, and then won it outright with a suffocating defense that held New Mexico (17-9 6-7) to just 26 points in the second half.

Malachi Flynn had 15 points and Jordan Schakel 11 for SDSU.
Mitchell, a junior forward from Riverside, scored his 1,000th career point on a bank shot early in the second half. That was part of a 9-2 run that expanded SDSU's 35-33 halftime lead to 44-35. Mitchell also made a layup on a nice spin move, Flynn hit a jumper and Schakel a 3-pointer.
Flynn, who made just 1 of 8 shots in the first half, made a left-handed layup and Schakel hit another 3 for a 51-40 lead with 13 minutes left.
Mitchell had a steal and a thunderous slam dunk for a 62-44 lead with 7:20 to go.
Vante Hendrix had 20 points for New Mexico.
The Aztecs had a tough go in the first half with the short-handed but fired-up Lobos.
Wetzell had 14 points in the first half and Mitchell 11.
Mitchell, Schakel and KJ Feagin each had two fouls in the first half, while New Mexico's Corey Manigault had three, including a technical for taunting after a thunderous dunk that gave the Lobos an early 10-5 lead. Manigault drew a second technical late in the second half and was ejected.
SDSU beat the Lobos 85-57 at Albuquerque on Jan. 29.
BIG PICTURE
The Aztecs have won a MWC-record 12 regular-season and tournament championships. They also won outright regular-season titles in 2006, 2014 and 2016. The shared regular-season titles in 2011, 2012 and 2015.
UP NEXT
San Diego State is at Boise State on Sunday.
Box
Postgame notes
Postgame quotes