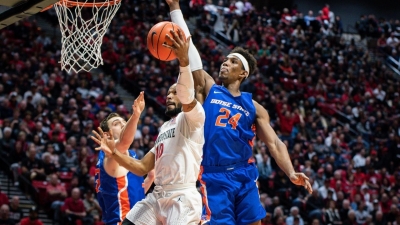 SDSU continued its hottest start since 2010-11, when it opened 20-0 behind Kawhi Leonard and reached the Sweet 16 for the first time before finishing a school-record 34-3.
RJ Williams scored 16 for Boise State (11-7, 3-3).
The Aztecs gave the sellout crowd at Viejas Arena plenty to cheer about. Feagin made three 3-pointers and Flynn had two in the first 7 minutes to open a 23-9 lead.
BSU pulled within eight points on Williams' slam dunk, but the Aztecs answered with an 18-2 run to blow it open.
Feagin made consecutive shots for a 33-19 lead, Jordan Schakel drained a 3 and Wetzell had a layup. Flynn and Wetzell made impressive shots on consecutive possessions for a 45-21 lead. Flynn dribbled between his legs, stepped back and hit a long 3. Wetzell made a post-up hook.
Feagin matched his season high of 13 with more than 6 1/2 minutes left in the first half. He had 16 points in helping SDSU take a 48-25 halftime lead. His previous season high was against Grand Canyon on Nov. 13.
BIG PICTURE
The Aztecs remain without Nathan Mensah, who missed his fourth straight game with a respiratory ailment. The Aztecs did get Aguek Arop back from a shoulder injury.
UP NEXT
San Diego State plays at Fresno State on Tuesday night.
Box
Postgame notes
Postgame quotes