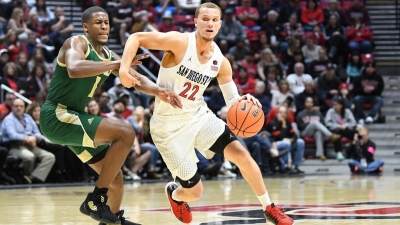 Yanni Wetzell and Jordan Schakel added 12 points apiece for the Aztecs (13-0). They needed a 9-0 run at the end of the first half to take control against the scrappy Mustangs (2-11).

SDSU remains on its hottest start since 2010-11, when it opened 20-0 behind Kawhi Leonard and reached the Sweet 16 for the first time before finishing 34-3. SDSU, Auburn and Liberty are the nation's only undefeated teams.
After leading just 31-23 at halftime, SDSU opened it up early in the first half. Flynn hit two long 3-pointers, including one that banked in, and KJ Feagin also hit a shot from behind the arc. Wetzell made three close-in shots to help the Aztecs take a 50-31 lead.
SDSU shot just 41.7%.
Kyle Colvin scored 13 points and Junior Ballard had 12 for the Mustangs. Alimamy Koroma had 12 rebounds.
The Aztecs frittered away an early 18-8 lead and let the Mustangs go ahead 23-22 on Koroma's two free throws with 2:41 before halftime. The Mustangs also got 3-pointers by Colvin and Ballard in surprising the Aztecs.
SDSU turned it on in the final 1:40 to take a 31-23 halftime lead. After Matt Mitchell missed a 3-pointer, Koroma rebounded but Wetzell stole the ball and scored. Flynn and Schakel had layups before Mitchell followed Flynn's missed 3 with a slam dunk, was fouled and made the free throw.
BIG PICTURE
The Aztecs completed an undefeated non-conference schedule (11-0) for just the second time in the last 89 seasons. The highlights were wins at BYU, against Creighton and Iowa in a tournament in Las Vegas and against Utah at Staples Center in Los Angeles, which will boost the Aztecs' resume for an at-large NCAA Tournament berth in case they don't win the conference tournament and its automatic bid.
UP NEXT
SDSU returns to Mountain West action when it hosts Fresno State on Wednesday. SDSU is 2-0 in the MWC, which started play this month because the conference tournament is a week earlier than normal.
Box
Postgame notes
Postgame quotes