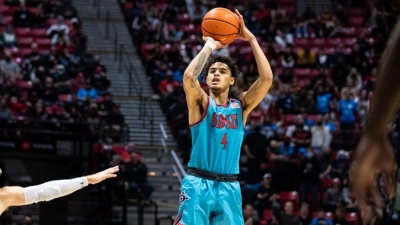 The Mavs (1-4) kept the game close throughout, with San Diego State never building an advantage greater than 10 points.
The game was tied at 46 with 8:38 to play, when the Aztecs went on a 9-0 run. Nathan Mensah and Bradley combined for three free throws and LaMont Butler followed with a three-pointer in transition and Bradley capped the run with a trey of his own.
HE SAID IT
"We did everything we had to try to get them ready to play tonight. It's the first time in a long time where we've actually played live (at shootaround) because I didn't think we were engaged enough and mentally ready to play and that's on me." -SDSU head coach Brian Dutcher
GET TO THE LINE
San Diego State is now 35-1 the last 36 times it has attempted more free throws than its opponent.
UP NEXT
San Diego State will open the Wooden Legacy with Georgetown in Anaheim on Thanksgiving night.
Box
Postgame notes
Postame quotes