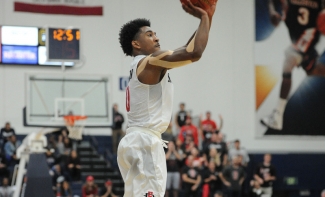 November 27, 2017 (Fullerton) - Finally, the Aztecs men’s basketball team got their first day of rest at the Wooden Legacy.  Tonight, they had another late game, but it was worth staying up for; the title game against Washington State in the two squads’ first meeting since 2006.

Hopeful that SDSU would play a lot better after their day of rest?  Think again.  The Cougars jumped out to a 7-2 lead, but SDSU eventually woke up and caught up easily.  Sophomore Nolan Narain tied the game with a sweet putback jam after freshman Matt Mitchell missed a free throw.  Senior Trey Kell put the Aztecs on top for the first time.  Once again, SDSU struggled to make threes, going 0-for-7 in the first 10 minutes of the first half and it cost them the lead as, once again, their opponent was able to convert.  Redshirt freshman Arinze Chidom gave the Cougars a lead with a big three.  But SDSU’s three machine tied it right up again; Mitchell hit the smoothest three you will ever see and Kell hit an even more pretty one to give the Aztecs a three-point lead.  And when it was tied again, Kell hit another three for 11 points in the first half alone.  When the game started to slip away, the freshman San Francisco transfer saved the day; Devin Watson hit a three and drew a foul to go to the line and hit a game-tying free throw.  But it was no use; sophomore Malachi Flynn hit the three that gave him 12 points in the half and the Cougars a 46-43 lead heading into the locker room.

The Aztecs began the second half without senior Malik Pope, who’s still nursing that ankle injury.  He was eventually ruled out of the game.  Despite his absence, SDSU stepped up their offensive rebound game and was able to capitalize and draw fouls and eventually get a lead back.  In fact, this was the first game of the Legacy—besides the opener Thursday night—where SDSU was able to keep up the pressure and keep the points coming.  But more bad news came when Kell hobbled out of the game with an ankle injury with six and a half minutes left in the game.  SDSU struggled to hold on with now two of their best players gone, but gave up the lead as Washington State tied the game on a three by junior Viont’e Daniels to give the Cougars an 8-0 run.  Sophomore Jeff Pollard reclaimed the lead for the Cougars on an and-one.  Kell came back into the game, but it was too late.  Washington State pulled away and with a minute left, SDSU was desperate.  A few free throws helped and with 20 seconds left, it was a three-point game.  Junior Robert Franks put the game out of reach with his free throws and the Aztecs lose the Wooden Legacy crown to the Cougars—who remain undefeated—93-86.  The Aztecs pick up only their second loss of the season.

With the tournament over, the Aztecs head to USD for a crosstown matchup on Thursday against the Torreros.  Tipoff is at 7:00 p.m.