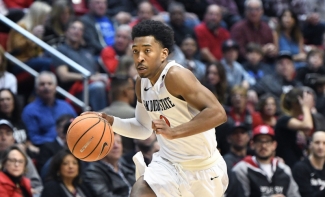 Aztecs to battle Cougars on Thursday in Wichita, Kansas

March 11, 2018 (San Diego) - The San Diego State men's basketball team received word of its postseason destination on Sunday, earning the No. 11 seed in the West Region against No. 6 seed Houston in the second round of the NCAA Tournament. The Aztecs (22-10, 11-7 MW), who captured the Mountain West tournament championship, will face the Cougars (26-7, 14-4 AAC) on Thursday, March 15 at Intrust Bank Arena in Wichita, Kansas.

This is SDSU's seventh NCAA Tournament appearance in the last nine years.

The Cougars enter the tournament with a 26-7 overall record after finishing 14-4 in the American Athletic Conference. Following a 77-74 upset of Wichita State on Saturday,  Houston advanced to the finals of the AAC tournament, where it fell in a 56-55 nail-biter to Cincinnati earlier this afternoon.

San Diego State will be making its 12th Division I NCAA Tournament appearance overall and first under head coach Brian Dutcher. This year's NCAA Tournament appearance also marks the 12th postseason berth for the Aztecs in the last 13 years. SDSU has won nine straight games, including Saturday’s 82-75 triumph over New Mexico in the finals of the MW tournament in Las Vegas, Nev.