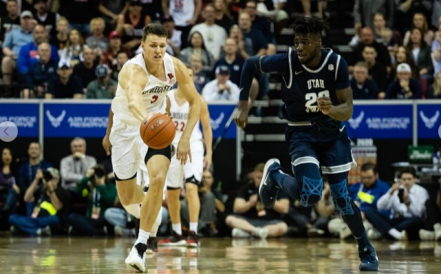 March 7, 2020 (Las Vegas) - Sam Merrill scored 17 of his 27 points in the second half, including a contested 3-pointer with 2.5 seconds left to lift Utah State to a 59-56 victory over No. 5 San Diego State in the Mountain West Tournament championship on Saturday.

The Aggies (26-8) rallied from a 16-point first-half deficit to win their second straight Mountain West Tournament title and earn the conference's automatic berth to the NCAA Tournament.

San Diego State's Malachi Flynn, the Mountain West's Player of the Year, had a chance to send the game into overtime but his 3-point shot from just beyond half court rattled in and out at the buzzer. It was just the second loss of the season for the Aztecs (30-2), and the second straight year they fell to Utah State in the tournament championship game.
Neemias Queta scored 11 of his 15 points in the second half for Utah State, which trailed 27-11 in the first half and at one point went nearly 13 minutes without making a field goal.
Flynn led the Aztecs with 16 points, including 14 in the second half, while Yanni Mitchell (12 points, 13 rebounds) recorded a double-double for San Diego State.
The Aztecs went on a pair of 11-0 spurts during a 25-4 run that led to their 27-11 lead. Merrill finally snapped his team's 0-for-10 shooting drought when he made three straight baskets (including a 3-pointer) in a little over a minute to cut San Diego State's lead to 27-18. 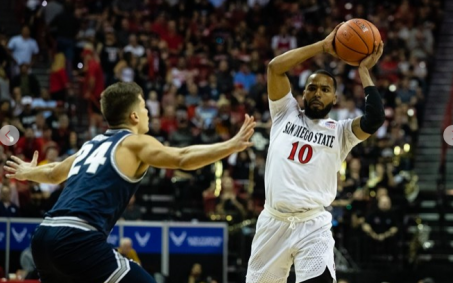 Aztecs forward Aguek Arop ended Utah State's 8-0 run with a layup, but Diogo Brito drained a deep 3-pointer at the buzzer as the Aggies scored 11 of the final 13 points in the half to cut their deficit to 29-21.
SAM I AM
Not only did Utah State claim it second straight conference tournament title, but Merrill won tournament MVP honors for the second year in a row. Merrill finished the three games with 83 points (29-for-52 shooting), 13 rebounds and assists. He made 11 of 26 shots from beyond the three-point arc.
CHILLY BEGINNING
Perhaps it had something to do with both teams playing their third game in as many days, but neither the Aztecs nor Aggies could buy a basket in the early going. Combined, they missed 20 of their first 25 shots (including 13 of the first 15), going 1-for-12 on 3-pointers.
While San Diego State eventually heated up, the Aggies were just 3-for-18 from the field (1-for-12 from 3-point range) over the first 18 minutes.
UP NEXT:
San Diego State awaits NCAA Tournament seeding.
Box
Postgame notes
Postgame quotes