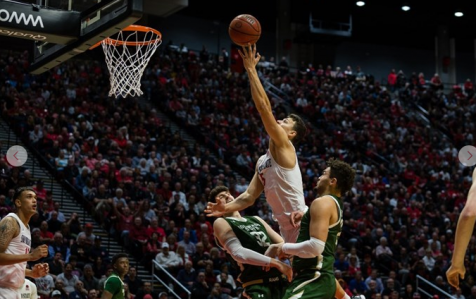 February 26, 2020 (San Diego) - Malachi Flynn scored 10 of San Diego State's last 17 points and the No. 5 Aztecs rallied from a seven-point deficit to beat Colorado State 66-60 Tuesday night and rebound from their only loss

Flynn finished with 17 points for SDSU (27-1, 16-1 Mountain West) after scoring just two points in the first half.

The Aztecs trailed 56-49 with 8:22 left before going on a 13-0 run. Jordan Schakel hit a put-back and Flynn a 3-pointer before Schakel hit the go-ahead 3-pointer with 4:50 left, making it 57-56.
SDSU's 13-0 run over 5 minutes, 17 seconds gave it a 62-56 lead.
The Aztecs were out-of-sync for much of the game and once again took poor shots. But unlike Saturday night, when their furious rally fell short against UNLV, they were able to get the lead and keep it.
Matt Mitchell scored 15 and Schakel 11. 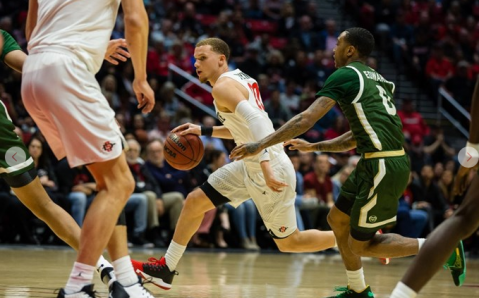 Nico Carvacho scored 17 for CSU ((19-11, 10-7) and Isaiah Stevens had 12.
Carvacho made a layup and Kendle Moore two free throws to pull the Rams to 62-60. Mitchell missed a 3 and then Stevens missed a shot, with SDSU's Yanni Wetzell tying up Carvacho, with SDSU getting the passion.
Mitchell and Flynn each made two free throws in the final nine seconds.
SDSU had been the nation's last unbeaten team before its school-record 26-game winning streak was snapped in a 66-63 home loss to UNLV on Saturday night.
The Rams came out fired up and surprised the Aztecs with a 12-0 run early in the first half to overcome a nine-point deficit and take a 14-11 lead.
SDSU seemed content to launch 3-pointers and not try to get inside, even when 6-foot-11 CSU center Nico Carvacho was out of the game. The Aztecs made only 6 of 17 from behind the arc in the first half.
The Aztecs pulled to 35-34 when Mitchell finally drove the lane and scored and was fouled, but he missed the free throw. Dischon Thomas made one of two free throws for the Rams to make it 36-34 at halftime.
BIG PICTURE
The Aztecs honored KJ Feagin, Wetzell and Nolan Narain on Senior Night. Feagin (Santa Clara) and Wetzell (Vanderbilt) are graduate transfers.
UP NEXT
San Diego State ends the regular season at Nevada on Saturday night.
Box
Postgame notes
Postgame quotes