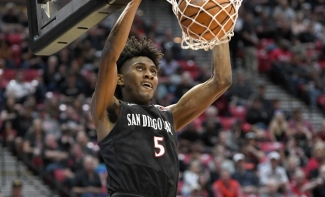 Conference honor is freshman’s first of his career

February 19, 2018 (San Diego) - San Diego State men’s basketball forward Jalen McDaniels has been named the Mountain West Player of the Week, the league announced this morning on its Facebook page. The award is the first of his career and first for SDSU since the 2015-16 campaign.

Hailing from Federal Way, Washington, McDaniels averaged 17.0 points, 8.0 rebounds, 2.0 assists and 1.5 steals, while shooting 60.9 percent from the field (14-23) and 75.0 percent from the free-throw line (6-8) during a week in which SDSU posted two double-figure wins over teams ahead of it in the league standings. Additionally, the forward committed only one turnover in 51 minutes (25.5 mpg).

In the 87-77 victory over Wyoming, McDaniels posted 16 points on 6-of-9 shooting (4-6 FT), four rebounds (3 offensive), one assist and a team-best one steal in 22 minutes. The freshman twice helped keep the Cowboys from making a late charge, once scoring a bucket when Wyoming cut its deficit to nine with 3:10 to play and later keeping an offensive possession alive with an offensive rebound, which led to two of his 16 points with just over two minutes to go in regulation.

Three days later vs. UNLV, McDaniels recorded his sixth double-double of the season with 18 points and a game-high 12 rebounds, to go with a career-high three assists and two steals in 29 minutes. He made a career-high eight field goals on a career-best 14 attempts and was also 2-for-2 from the free-throw line.

The 6-10 freshman was a part of a defensive effort that limited UNLV’s Brandon McCoy to nine points (3-11 FG) and six rebounds, which were well below his 17.3-point, 10.2-rebound average coming into the game. In the first half alone when the Aztecs built a 20-point halftime lead, McDaniels had 14 points (6-10 FG) and seven rebounds, and helped hold McCoy to two points (1-5 FG) and two turnovers.

SDSU defeated the Runnin’ Rebels, 94-56, which was its 12th win in its last 13 meetings with UNLV. The 38-point margin of victory was also the largest by either team in the 69-game history of the series.

McDaniels’ player-of-the-week award ends SDSU’s longest drought without being recognized since the inception of the Mountain West (1999-2000) and marks the first weekly honor for San Diego State since Trey Kell earned the accolade on Jan. 25, 2016.

The Aztecs, winners of two straight games, return to action on Wednesday when they play at Air Force at 6:30 p.m.