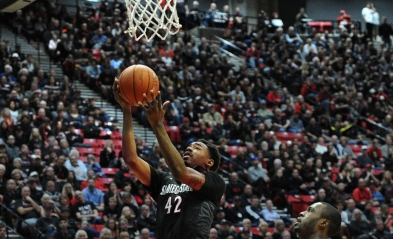 January 1, 2017 (San Diego) - What better way to kick off a new year than by kicking off conference play?  The San Diego State Aztecs men's basketball team did just that today against the University of New Mexico.

The Aztecs got off to the same rocky start that they did against Tulsa last week; turnovers and no scoring.  That is, until the Aztecs broke the game open with a three, free throws and a two to buoy them to a 9-4 lead.  Sophomore guard Jeremy Hemsley continued his stellar season with a three and a fast break two in the first half to catapult the Aztecs to an eight point lead with 11 minutes left.  But the Lobos came back and cut the lead to two at 22-20 with 7:18 left.  That wasn't a problem for the Aztecs; with some quick baskets, they were back up to an eight point lead with four and a half minutes left.  The Aztecs stepped on the gas towards the end of the first half and went to the locker room with a commanding 36-25 lead.

In the second half, SDSU kept up the pressure with turnovers and big baskets.  Even when they eased their foot off the gas and the Lobos were within six, SDSU drove to the hoop and kicked their lead back up to eight.  The Lobos still found their way back with a finger roll basket by freshman guard Jalen Harris to make the score 56-52 with five minutes left.  Redshirt senior forward Tim Williams scored the clutch basket and suddenly, what was a 10-point lead for the Aztecs was now a two-point lead.  As is usually the case for the second half Aztecs, they played too comfortably and gave up the lead to New Mexico on a few series of poor defense, allowing the Lobos to win 68-62 and handing the Aztecs their first loss in conference play, which should have been a win.  SDSU drops its first Mountain West opener in 10 years and ends its four-game winning streak.

The Aztecs continue conference play in Reno against Nevada.  Tipoff is set for 8:00 p.m. and you can watch the game on ESPN2.