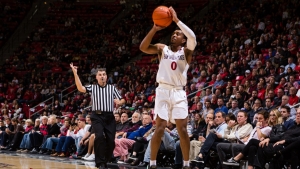 Story by Liz Alper
Photo courtesy goaztecs.com
February 5, 2019 (Albuquerque) - San Diego State men’s basketball had a rare national TV appearance tonight for their battle against the Lobos, the only team that has knocked off Top 10-ranked Nevada.

New Mexico came out firing, but SDSU moved the ball around efficiently and allowed production from everyone on the floor and it gave them a quick early lead.  The Aztecs were 7-8 from the field until the Lobos got some giddy-up and tied the game.  SDSU fought hard and it didn’t take long for them to pull back in front thanks to an 8-0 run and redshirt sophomore Jalen McDaniels and his 13 points.  The Aztecs stepped up their defensive game too, creating turnovers and rebounds that led to points at the other end of the floor.  Even when New Mexico went on a 7-0 run and SDSU’s field goals fell to 6-19, McDaniels upped his tally to 17 points and kept the Aztecs ahead.  But the Aztecs couldn’t escape redshirt sophomore JuCo transfer Keith McGee’s career-high 14 points and went to the locker room hanging onto the lead by a thin wire, up 37-36.

The second half came and SDSU lost their grip on their slim lead as New Mexico jumped out by their biggest lead of the game.  The Aztecs couldn’t stop UNM’s fast-paced offense and the deficit quickly racked up.  The Lobos won 83-70.  The Aztecs drop to 13-9 overall and 5-4 in Mountain West play.
UP NEXT
The Aztecs return home for a Saturday night matchup against Utah State.  Tipoff on Steve Fisher Court at Viejas Arena is at 7:00 p.m.
Like our sports coverage?  Donate to help support ECM’s sports section!  Type “Sports” on the donation line!
Check out our sports section for more sports stories!
Follow @ECMagSports on Twitter for live sports coverage and in-game updates!
Box