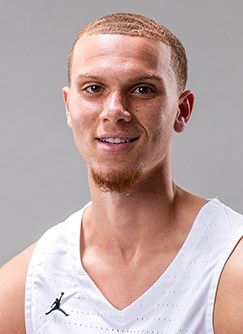 In the Brian Dutcher era, Flynn is the sixth player selected following Randy Holcomb in 2002, Jamaal Franklin in 2013, Xavier Thames in 2014 and the aforementioned Leonard and McDaniels. Dutcher has now coached 20 NBA draft picks, which includes his time as an assistant coach.

Flynn joins a Toronto team that finished the 2019-20 season with a 53-19 record, Atlantic Division champions, the No. 2 seed in the Eastern Conference and reached the semifinal round.

Following the 2019-20 campaign, Flynn became the most decorated Aztec in a single season. He was named a consensus second-team All-American after being recognized by The Associated Press, National Association of Basketball Coaches (NABC), United States Basketball Writers of America (USBWA) and The Sporting News. With that honor, he joined SDSU Hall of Famers Michael Cage and Kawhi Leonard as the third consensus All-American in program history.  In addition, he garnered second-team All-American honors from CBS Sports, NBC Sports and The Athletic and first-team distinction from Sports Illustrated and STADIUM.

He was the Most Valuable Player of both the Continental Tires Las Vegas Invitational and Basketball Hall of Fame Classic, an NABC first-team All-District 17 and USBWA All-District IX performer.

His accomplishments in the classroom included being honored as an Aztec Scholar-Athlete, Academic All-Mountain West designee, and inclusion on the NABC Honors Court.

In 32 career games with San Diego State, all of which were starts, Flynn scored in double figures 31 times and broke the 20-point barrier 10 times. He had 20 games of at least five assists including a season-high 10 against LIU which, combined with 13 points, resulted in his second career double double. He reached career-highs with 36 points at Nevada on Feb. 29, 2020 and 10 free throws at Utah State on Jan. 4, 2020, and equaled a career-best with nine rebounds against UNLV on Feb. 22, 2020.

He led SDSU to the Mountain West regular-season title and the championship game of the Mountain West Tournament last year, and along with his teammates expected to be a No. 1 or No. 2 seed in the 2020 NCAA Tournament, before it was canceled due to the coronavirus pandemic. In his 94-game college career, 62 of which came at Washington State, Flynn averaged 14.4 points, 4.1 assists and 3.6 rebounds.

With Flynn being taken by the Raptors, San Diego State is one of 10 schools nationally who had at least one play taken in the NFL, MLB and NBA drafts in 2019 and 2020 and is the only school represented on that list which is not in a Power 5 conference.