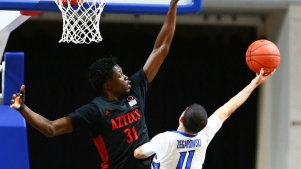 League play begins on Dec. 29 and culminates with the MW Championship on March 13

October 9, 2020 (San Diego) -  San Diego State men’s basketball, in conjunction with the Mountain West Conference, has released its initial version of the 2020-21 league slate of games on Friday morning, the first phase of the schedule process for the upcoming season.

For the eighth consecutive year, the format will include 18 games (nine home and nine road contests) with each team playing eight opponents twice (home-and-home) and two opponents once each (one at home and one on the road). The conference’s regular-season schedule is set to begin on Dec. 29 and wraps up on March 6.

For the Aztecs, league play is scheduled to commence on Dec. 29, a Tuesday, against the New Mexico Lobo in Viejas Arena, where SDSU holds a 14-7 lead in the all-time series against the Lobos and was the opponent against whom San Diego State secured its Mountain West-record 12th title last year. The team then heads to Las Vegas and UNLV, where it’s won 10 of its last 11 against the Runnin’ Rebels, for its first conference road trip on Saturday, Jan. 2.

San Diego State then returns to The Mesa for a pair of games leading off with a matchup against Boise State on Tuesday, Jan. 5 and followed by a game on Saturday, Jan. 9 versus San Jose State. In winning each of its last three against the Broncos in Viejas, the Aztecs have enjoyed an average margin of victory of more than 10 points.  The Spartans have never won a game in Viejas (0-8), and overall are just 8-28 in 36 trips to “America’s Finest City.”

The two home games are then followed by a pair of road contests starting at Wyoming, on Tuesday, Jan. 12 and then at Utah State on Saturday, Jan. 16. The Aztecs defeated the Cowboys in Laramie last year by its second largest margin of victory against Wyoming, 20 points since the Mountain West began play in the 1999-2000 season. In Logan, where SDSU is 4-1 all-time in the Dee Glen Smith Spectrum, San Diego State will seek a measure of revenge for its last second loss to the Aggies in the championship game of the 2020 Mountain West Men’s Basketball Tournament.

The Wyoming game is the only time the Aztecs and Cowboys will see each other during the regular season. The other team which SDSU will only play once during the league slate is Colorado State in the second half of the conference season.

The first half of the schedule closes with a pair of home games, followed by a road game and then the team’s first bye.

On Tuesday, Jan. 19, the Fresno State Bulldogs, who saw a three-game winning streak in Viejas come to an end last season, makes an appearance on Steve Fisher Court, and four days later, on Saturday, Jan. 23, the Nevada Wolf Pack are in town. San Diego State is 9-1 all-time against UNR on its home court and the Wolf Pack have not tasted victory on San Diego since the 1998-99 season. On Tuesday, Jan. 26, the team is in Colorado Springs, Colo., for a matchup against Air Force, a team it has split the last four games against in the Falcons’ Clune Arena.

When the team gets back to action after its bye on Jan. 30, its first four contests will flip flop between away and home games. It begins on Tuesday, Feb. 2 in Albuquerque, N.M., against New Mexico. Last year, the Aztecs handed the Lobos their worst loss in The Pit, a 28-point drubbing, since the 2001-02 season.

Then back home four days later, on Saturday, Feb. 6, the Utah State Aggies visit Viejas Arena, where SDSU holds a 7-1 advantage all-time. Three days after the Utah State game, the Aztecs will be in northern California to play at San Jose State, where in winning five of its six Mountain West meetings, SDSU has averaged a 17.6 point margin of victory, on Tuesday, Feb. 9.

The last of the four games comes at home on Saturday, Feb. 13, against the Colorado State Rams, in the two program’s only regular-season tilt. The Aztecs are 15-1 in the last 16 against the Rams in San Diego, and would hold a 16-game winning streak were it not for a last second Colorado State layup, which was the margin of victory, in the team’s matchup in the 2016-17 season. San Diego State puts a wrap on a two-game homestand on Tuesday, Feb. 16, against the Air Force Falcons, who are winless in their last 14 games on Steve Fisher Court dating back to the 2004-05 season.

The team heads back out on the road for three of its final four games sandwiched around its second bye.

A two-game road swing begins on Saturday, Feb. 20 at Fresno State, and continues Tuesday, Feb. 23 at Boise State. In games in Fresno’s Save Mart Center, SDSU is 6-4 in its last 10 games including a nine-point victory last season and in Boise, the Aztecs snapped a three-game slide last year with an 18-point win. The last home game of the year comes on Saturday, Feb. 27, against UNLV, the only team to get a win in Viejas Arena last year, which is then followed by the team’s final bye on Tuesday, March 2.  The regular season concludes, where else, but at Nevada on Saturday, March 6, where the Aztecs will finish the regular-season slate for the third consecutive year.

The 2021 Mountain West Men’s Basketball Championship will be conducted from Wednesday, March 10 to Saturday, March 13 in the Thomas & Mack Center in Las Vegas.

The team’s two byes come on January 20 and March 2.

Looking to defend last season’s Mountain West regular-season crown, head coach Brian Dutcher and the Aztecs welcome back three returning starters in all-conference senior forward Matt Mitchell, senior guard Jordan Schakel and junior forward Nathan Mensah. In all, the Aztecs, who finished last season ranked No. 6/6, posted a 30-2 record and held the nation’s longest winning streak (26 games), return seven letterwinners and will bring nine newcomers into the fold, featuring CSUN graduate transfer Terrell Gomez, who led the NCAA in free-throw percentage last season and was a two-time All-Big West performer as well as the conference's Freshman of the Year in 2017-18.

With the conference slate known, fans should look for SDSU's non-conference schedule to be announced soon.