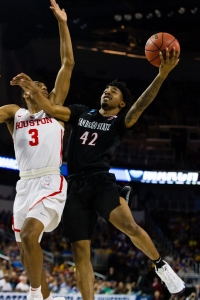 After a gridlocked first couple of minutes, redshirt freshman Jalen McDaniels and senior Malik Pope got the ball rolling with a quick layup and a jumper.  After Houston took the lead on three free throws by junior Corey Davis Jr., Pope slammed it home to give the Aztecs the lead back.  But the Aztecs were at the behest of Houston junior Galen Robinson Jr., who added some quick twos to give Houston the lead and capped it off with redshirt senior Rob Gray’s three pointer.  Junior Max Montana was a one-man show, getting the Aztecs back into the game with a smooth three and a layup and working defensively to get rebounds and steals.  Junior Jeremy Hemsley drove it in and the Aztecs had a one-point lead again.  SDSU was on a 7-0 run for two minutes.  The two teams went back and forth, with Gray hitting a looping jumper to jump back out in front.  He extended the Houston lead to its biggest of the game, eight.  The Aztec offense went stale for the last two minutes of the half.  Gray launched a monster three-pointer from deep for 16 first half points and Houston led 39-29 at the half.

Both teams had trouble scoring to open the second; only 10 points were scored by either team in the first four and a half minutes.  Gray reached 18 points and the Cougars still led by 10.  But SDSU started to fight back, getting to the line and knocking down free throws to climb back into the game.  Soon, the 10-point lead was cut to a four-point lead.  But they started the fight too late; Gray dominated and the Cougars won by just two points, 67-65 and ended the Aztecs’ season in heartbreaking defeat.