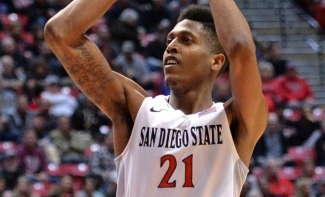 March 6, 2018 (San Diego) - San Diego State senior forward Malik Pope has been named to the all-Mountain West second team by the conference’s head coaches, the league announced Tuesday morning. Freshman forward Jalen McDaniels, meanwhile, was voted to the honorable mention squad. All selections were based on conference play only.

Against Mountain West opposition, Pope averaged a team-best 13.1 points and ranked second to McDaniels in rebounding (7.0) and field-goal percentage (.497). Of his 19 double-figure scoring games this season, 14 occurred in league play as were two of his three double-digit rebounding performances.

Pope was tied for fourth in the Mountain West in blocked shots (1.2), fifth in offensive rebounds (2.7), seventh in field-goal percentage, ninth in rebounding and 18th in scoring.

The all-Mountain West honors are the first of both players’ careers. This marks the 17th straight season in which SDSU has had at least two all-league performers. On Sunday, the conference media voted McDaniels as an all-MW third team member and Pope to the honorable mention list.

San Diego State returns to action on Thursday as the fifth-seeded team at the MW Championship. The Aztecs will face No. 4-seed Fresno State in the quarterfinals at 2:30 p.m. at UNLV’s Thomas & Mack Center.