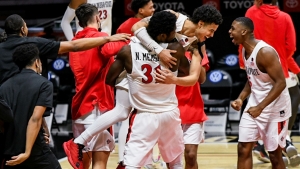 Mitchell made all 11 of his foul shots. He added eight rebounds. Nathan Mensah had 15 points and Pulliam finished with seven for San Diego State (9-2, 3-1 Mountain West Conference).

Nevada's Grant Sherfield, who finished with 20 points and nine assists, hit a deep contested 3-pointer to make it 67-all with 4.6 seconds to play. Pulliam took the in-bound pass, raced down court to the left block and kissed a running floater off the backboard and in as time expired.
Jordan Schakel, the Aztecs' second-leading scorer heading into the contest at 14 points per game, shot only 20 percent for the game (2 of 10).
Desmond Cambridge Jr. added 17 points and K.J. Hymes had 14 points for the Wolf Pack (8-5, 3-3).
The Aztecs improve to 2-0 against the Wolf Pack for the season. San Diego State defeated Nevada 65-60 last Thursday.
Box
Postgame notes