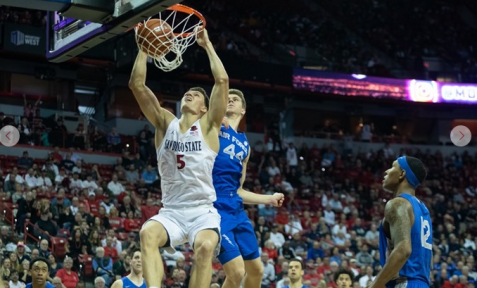 Schakel scored 14 of his 17 points in the second half as the fifth-ranked Aztecs rallied for a 73-60 win over Air Force in the quarterfinals of the Mountain West Conference tournament on Thursday.

Schakel, who shot 1 of 5 in the first half, hit four 3-pointers in the second half for the top-seeded Aztecs (29-1), who rode a 21-3 run to their 13th consecutive quarterfinal victory.

"Nothing different happened," Schakel said. "I just had to keep shooting. My teammates continued to keep finding me and believing in me, so I thank them for that."
Yanni Wetzell and Malachi Flynn had 16 points each for San Diego State, which is hoping to earn a No. 1 seed in the NCAA Tournament. After surviving the scare from Air Force, SDSU plays the winner of Boise State-UNLV in the semifinals.
Flynn, the Mountain West's player of the year and defensive player of the year, had three steals, seven rebounds and eight assists to offset a 4-of-10 shooting performance.
AJ Walker scored 18 points for Air Force (12-20), which advanced by beating Fresno State on Wednesday. Walker came off a 24-point game against the Bulldogs.
"It's Thursday, but it felt like a Saturday championship game the way the two teams played and slugged at each other," Falcons coach Dave Pilipovich said. "We were good today. We did some really good things." 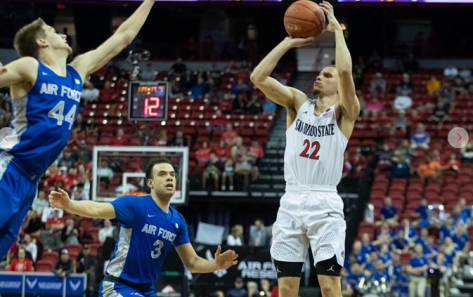 Seniors Caleb Morris (12 points) and Sid Tomes (10 points) were the other Falcons in double figures.
"Credit to them," Tomes said. "That's why they're ranked so high in the country."
Air Force shot 60% in the first half in part to Walker, who scored 14 points in the first half. His 3-pointer with 39.2 seconds left preserved a 37-33 halftime lead for the Falcons.
"I have a very coachable team," Aztecs coach Brian Dutcher said. "I've told them I'm tired of teams shooting over 50% on us in the first half. So they let Air Force shoot 60. They followed my instructions."
Flynn attributed Air Force's start to making tough shots.
"A lot of the shots were just good shots on their part," he said. "We have to give credit where credit is due."
But the Falcons shot just 27.3% in the second, opening the door for the Aztecs.
Air Force took a 44-39 lead on Morris' 3-pointer. After a dunk from Wetzell, Schakel then hit back-to-back 3s that gave San Diego State its first lead since early in the first half.
"To be a shooter, you have to have extreme confidence," Schakel said. "I think everyone on this team has extreme confidence."
Matt Mitchell hit San Diego State's fifth 3 of the half for a 60-47 lead with 7:05 remaining, capping off the run.
Air Force went on a 9-2 run to make it 62-56 with 3:46 remaining, but the Aztecs went on a 9-4 stretch capped off by Schakel's fourth 3 of the half to make it 71-60.
"They had their run, and they played like their season was on the line," Wetzell said. "We do definitely have to get off to a better start."
SLOW START
San Diego State went 1 of 6 to begin the game, but responded by making 6 of 7 to take a 19-17 lead on a 3-pointer from Adam Seiko. Flynn was 1 of 3, while Aztecs leading scorer KJ Feagin was 2 of 5 in the first half.
HISTORICAL MISMATCH
San Diego State improved to 33-15 all-time in the Mountain West tournament, while Air Force is 0-17 in quarterfinal games.
COMING UP CLUTCH
Schakel's five 3-pointers tied a career high set against BYU on Nov. 19, 2019.
DIFFERENCE IN 3S
Air Force was 7 of 13 from 3 in the first half, but went 3 for 11 in the second half. San Diego State shot 6 of 12 from distance in the second half after making 5 of 14 in the first 20 minutes.
"We made some shots early, and when you do that, that basket becomes twice as big and it opens up a lot," Pilipovich said. "Then you know it's probably not going to continue that way, but the first half was emotional for us. It just fell into our lap a little bit."
UP NEXT
San Diego State plays either Boise State or UNLV on Friday.
Box
Postgame notes
Postgame quotes