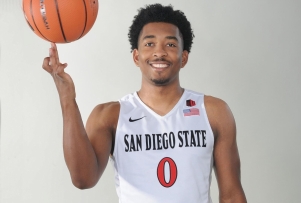 August 27, 2018 (San Diego) - San Diego State released today its 2018-19 men’s basketball non-conference schedule. The Aztecs will play 13 games prior to the start of Mountain West action with eight coming at Viejas Arena. The challenging slate features five teams that advanced to the postseason, including three that earned NCAA tournament berths.

Not included among the eight home games is an exhibition contest vs. Chaminade that is set for Nov. 1. SDSU’s primer for the regular season will come against a Division II team that went 16-12 (11-9 PacWest) last year and won a game at the Maui Jim Maui Invitational.

The Aztecs will tip-off the season against a pair of SWAC teams – Arkansas-Pine Bluff (Nov. 6) and Texas Southern (No. 14) – that met in the 2018 conference tournament final. UAPB, which finished the conference campaign tied for second in the standings, ultimately fell short and Texas Southern moved on to the NCAA tournament where it won its First Four game before falling in the Round of 64.

The famed Maui Invitational is next on the docket for SDSU. San Diego State will open against NCAA Elite 8 participant Duke in the quarterfinals on Nov. 19, and then face either Auburn or Xavier, both ’18 NCAA participants, on Nov. 20. The tournament wraps up on Nov. 21 against the other side of the bracket, which consists of Arizona, Iowa State, Gonzaga and Illinois. The Wildcats and Bulldogs both made the 2018 NCAA tournament.

San Diego State’s tour of the SWAC continues once it returns to America’s Finest City as Jackson State is slated to visit Viejas Arena on Nov. 27. The Aztecs’ stay at home will be brief as they are scheduled to travel to the Midwest to face Illinois State on Dec. 1 for the Mountain West-Missouri Valley Challenge. The Redbirds, who were MVC finalists, are slated to return their top four scorers, including a trio that averaged more than 15 points per game in 2017-18.

SDSU will finish out its non-league schedule with six games in the state of California, including five at home. The first of those five will be against cross-town foe San Diego, which made it to the quarterfinal round of the 2018 CIT. San Diego State will welcome to campus a Toreros program it has defeated eight consecutive times at Viejas Arena.

The final non-conference road trip is to Berkeley where the Aztecs will face California. The game is confirmed for Dec. 8, with San Diego State looking to avenge last season’s one-point loss. SDSU’s last trip to Haas Pavilion, however, ended in a 77-57 victory back in 2010. The Scarlet and Black is 4-1 in its last five meetings with the Golden Bears.

Four days after its clash with Cal, San Diego State will play host to Cal State Dominguez Hills. The Dec. 12 event will be the first game between the schools. The Toros, who are based in Carson, compete at the Division II level.

Old foe Brigham Young returns to the schedule and will share the hardwood with the Aztecs on Dec. 22. The teams have not met since the 2014 Maui Invitational when San Diego State prevailed in double overtime, 92-87. Prior to that meeting, the schools had not played each other since the 2010-11 campaign when they were members of the Mountain West. That year, SDSU and BYU shared the regular-season title with the Aztecs claiming the conference tournament crown after dismissing the Cougars, 72-54, in Las Vegas. Brigham Young, which now calls the West Coast Conference home, won 24 games and played in the NIT last year.

San Diego State will close the calendar year on Dec. 29 with a game against Brown. It will mark just the second meeting with the Ivy League school and first since Dec. 28, 1979. The Aztecs will look to even the series before ringing in 2019 against CSUN on New Year’s Day. SDSU has won four consecutive games vs. the Matadors, but has not faced the Big West school since 2014.

The Aztecs are set to return three of their top four scorers from last season (Devin Watson, Matt Mitchell, Jalen McDaniels) and four of their top six (Watson, Mitchell, McDaniels, Jeremy Hemsley) off a 2017-18 team that went 22-11, won their Mountain West-high 11th conference title and advanced to the NCAA tournament for the seventh time in the last nine years.