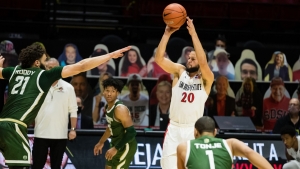 Colorado State defeated San Diego State 70-67 on Saturday, setting a school and Mountain West Conference record by erasing a 26-point deficit. In the rally they had a 19-0 first-half run and went 14-0 in the second half before scoring the last 11 points of the game.

In this one the Rams trailed by 29, 42-13, late in the first half and had a 14-0 run early in the second half but never got closer than 14 points until scoring the final basket of the game.
Terrell Gomez had 13 points for San Diego State (7-2, 1-1 Mountain West Conference). Matt Mitchell added 12 points. Nathan Mensah had 11 points.
David Roddy and John Tonje had 15 points for the Rams (6-2, 3-1), whose four-game win streak was broken. Isaiah Stevens had 11 points.
Box
Postgame notes
Postgame quotes