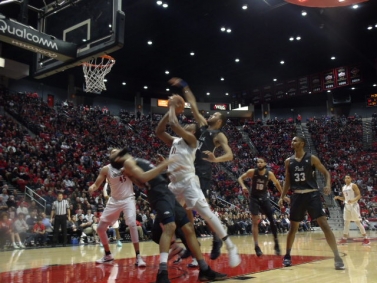 March 3, 2018 (San Diego) - For the last game of the regular season, San Diego State men’s basketball welcomed Nevada back to Viejas Arena on Senior Night.  The Wolf Pack sit atop the Mountain West, so the Aztecs had their work cut out for them. 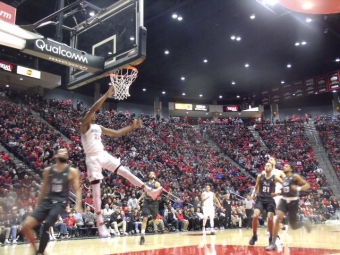 That stat didn’t daunt Matt Mitchell.  The freshman drained a three to start the game.  But the real story of the first half was senior Kameron Rooks, who laid up two quick twos to help the Aztecs out.  But the Aztecs’ hot start and quick pace were soon erased by the Wolf Pack, led by junior Jordan Caroline, who quickly racked up 14 points.  The Aztecs sent in a junior of their own, Devin Watson, who singlehandedly got SDSU back in the game with a two and a three and the Aztecs were down by four.  But Nevada quickly countered and the Aztecs were down by 10.  But by the end of the half, the Aztecs were back in business, thanks to back-to-back three pointers, starting with a three from senior Trey Kell.  That was followed up by a game-tying three from freshman Jordan Schakel. The Aztecs would’ve been happy with the tied game going into the locker room, but Rooks wasn’t.  He tipped in a layoff at the buzzer to give the Aztecs a 36-34 lead at the half. 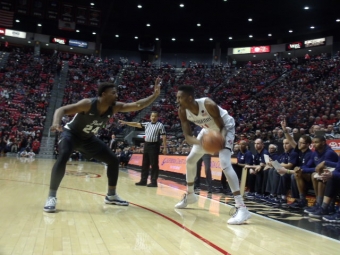 The second half was the half of Rooks.  The 7-footer quickly posted six points in the first three minutes of the half.  A three by Kell made it clear that SDSU would set the tone of the half and keep it this time.  The Aztecs played well, but the Pack stayed close behind.  But since it was Senior Night, the freshmen have to help the seniors out, so after senior Malik Pope drained a three, redshirt freshman Jalen McDaniels slammed it home to give the Aztecs their biggest lead of the game.  Caroline finished with 29 points and junior Caleb Martin scored 22, but that didn’t faze the Aztecs as they gifted their seniors with a 79-74 win. For the Aztecs seniors, it was a nice send-off; Kell finished with 17 points and Pope with 16.  Rooks finished with 12 points on the night. 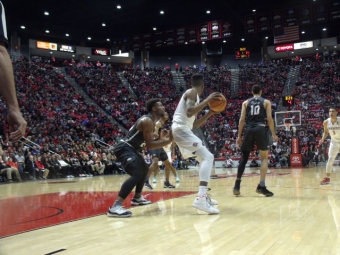 "It was a great game against a great team," Kell said after the game. "...we just did our best with sticking to the game plan, playing together and then also, the crowd was great tonight.  So all those put together, I'm glad we came out with a victory on my last home game here."

"I'm just glad they gave me the opportunity," Rooks said.  "They trusted me out there.  That's the one thing I feel that affected me the most, which is trust."

"I feel like we've just done a great job of fighting through adversity," Pope said. "I think we really just adjusted...we found our chemistry and learned a lot about each other throughout the process of the ups and downs throughout the season.  I feel like today and Boise (the game before), kind of just was a testament to how we're gr 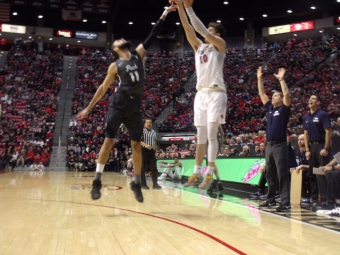 make sure I thank them (the seniors) properly for all the hard work they've given this program," head coach Brian Dutcher said. "...these seniors have done nothing but represent this university with great class, both on the floor and off.  They're gonna get their degrees, they're gonna represent this university far greater off the floor than they ever did on, so I'm so proud of all of them.  I told the team two weeks ago that we're the best team in this conference and if you don't believe that, then you shouldn't step on the floor and so we believe we're the best team in this conference, so we have to prove it every night we go out there and I thought our kids did it tonight...they were up for every challenge."

With the season over, SDSU now looks ahead to the Mountain West tournament, starting Thursday in Las Vegas.  SDSU, who holds the No. 5 seed in the conference, will face Fresno State. 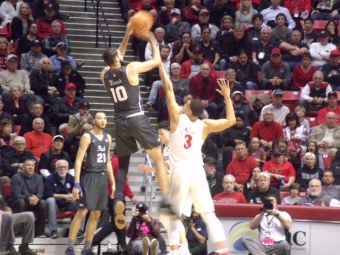 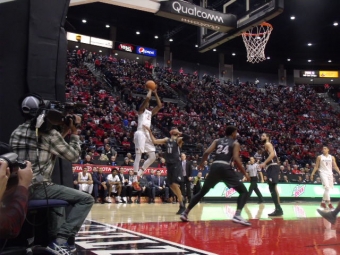 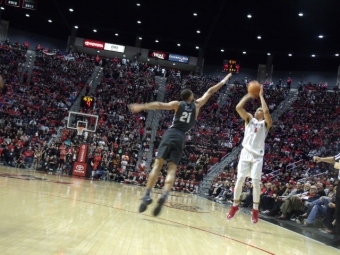 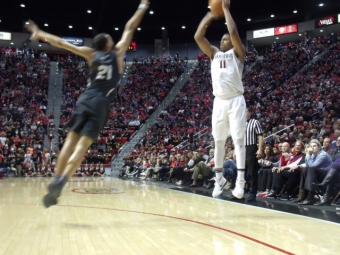