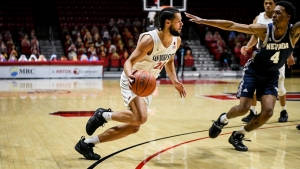 Junior forward Nathan Mensah was one of the bright spots going 6-of-9 from the floor and totaling 13 points to lead the Aztecs. It was the fourth consecutive game in double figures and sixth of the season for the Accra, Ghana native. He also added nine rebounds, three steals, two blocks and an assist.

The only other player in double figures for San Diego State was senior forward Matt Mitchell, who finished with 10 points, two assist and two rebounds. Mitchell has reached double-digit scoring in each of the teams 12 games.
The Aztecs (9-3, 3-2 Mountain West) were limited to 20 points in the first half, the third game this year they have reached that total in the first 20 minutes. On the previous two occasions they came out in the second half and totaled 45 against Pepperdine, in a 65-60 win, and had 42 points against BYU, but lost 62-72. Against Utah State (10-3, 7-3 MW) they outscored the Aggies in the second half, totaling 25 points, couldn't overcome its tough shooting night.
San Diego State had a 5-2 lead on the three pointer from senior guard Trey Pulliam two minutes into the game and was up 7-4 after a Mensah bucket with 16:59 to play in the half, but 11 turnovers in the first 20 minutes combined with the Aggies shooting 14-of-29 (48.3 percent) gave Utah State to a 33-20 halftime advantage.
In the second half, San Diego State cut the lead to five points on two occasions, but could get no closer in the 12-point loss. Both teams set season lows for scoring in the second half. Utah State totaled 24 points in the second half, the lowest of the season for the hosts, while the 25 points in the second half for San Diego State marked the fewest of the season for the road team.
For Utah State, Neemias Queta tallied 14 points and 16 rebounds to lead the Aggies to their ninth consecutive victory. Brock Miller led all scorers with 16 points.
The teams have little time to prepare for game two of this series. The tip off is scheduled for 10:30 a.m. on Saturday and will be broadcast on CBS.
Box
Postgame notes