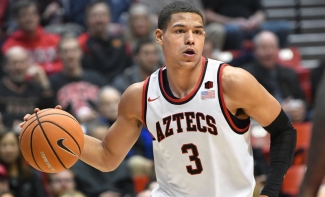 Senior picks up SDSU’s second award of the season

March 4, 2018 (San Diego) - San Diego State senior guard Trey Kell has been named the Mountain West Player of the Week, the league announced today from its temporary offices in Las Vegas in preparation for this week’s MW Championship. The award is the second of his career and the second of the season for SDSU.

In Tuesday’s win over the Broncos, a team that was receiving votes in the AP Top 25 Poll, Kell scored eight points, while adding a team-high four assists, three rebounds and two steals. He played 16 turnover-free minutes in the second half and his steady hand at the point guard position was a major reason SDSU had just two second-half turnovers as a team. Kell was on the floor for only one SDSU turnover after intermission.

Last night vs. the nationally ranked Wolf Pack, Kell tied a career-high with nine assists and scored seven of SDSU's final 10 points to lead the Aztecs to victory. His seven points came during a time when Nevada cut San Diego State’s lead to two points. Kell scored 10 of his 17 points in the second half and added four assists and two rebounds. For the game, his plus/minus rating of +16 was a game high. Kell also became the first Aztec with at least 17 points and nine assists in a game since Tony Bland vs. CSUN on Nov. 21, 2001, and he was the first player to ever do it for SDSU in an MW game.

Kell joins Jalen McDaniels on Feb. 19, as the two Aztecs to be named Mountain West Player of the Week this season.

San Diego State returns to action on Thursday as the fifth-seeded team at the MW Championship. The Aztecs will face No. 4-seed Fresno State in the quartefinals at 2:30 p.m. at UNLV’s Thomas & Mack Center.