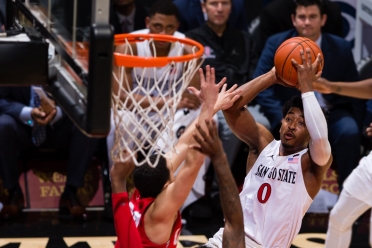 San Diego State swept the season series with the Spartans last year and now have won 10 of the last 11 meetings between the programs.

The Aztecs took control early, with Matt Mitchell and McDaniels hitting back-to-back 3s to start the game and rolling to a quick 16-3 lead over the first five minutes. San Jose State rallied and Michael Steadman scored at the basket with just over two minutes left in the first half to get within a field goal, but Watson scored on a layup to send San Diego State into intermission with a 25-21 advantage.

McDaniels hit two jumpers and a 3 to push the Aztecs lead to 32-23 to start the second half.