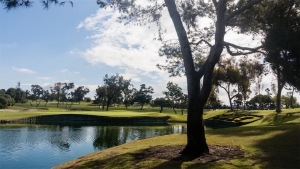 For the first time since 2015, SDSU will skip the University of Minnesota’s season-opening Gopher Invitational, opting to compete in the Husky Invitational Sept. 16-17 in Bremerton, Washington. The Aztecs will utilize their trip to Gold Mountain Golf Club as a preview for next spring’s Mountain West Championship, which will be held on the same course. San Diego State will be making its first appearance at the Husky Invitational since 2014, when it posted a third-place finish at the same locale.

From the Puget Sound area, the Aztecs will make their way to a more arid realm, participating in the annual William H. Tucker Intercollegiate Sept. 27-28 in Albuquerque, New Mexico. SDSU has been a fixture in the Duke City in 12 of the last 14 years, highlighted by a team title in 2016.

As the calendar flips pages, the Aztecs will make their yearly excursion to the Bay Area for the Alister Mackenzie Invitational Oct. 7-8 in Fairfax, California, just north of San Francisco in rural Marin County.

SDSU will wrap up its autumn slate nearly a month later when it returns north for the Saint Mary’s Invitational Nov. 4-6 in Pebble Beach, California. The Aztecs have made the exclusive Poppy Hills Golf Course a regular stop in their rotation over the last five years, highlighted by back-to-back team titles in 2015 and 2016.

San Diego State will reconvene for the spring semester just over three months later when it makes its 10th consecutive appearance at The Prestige presented by Charles Schwab Feb. 17-19 at PGA West in La Quinta, California. The final two rounds of last year’s event were streamed live on Golfweek.com.

The Aztecs will have nearly three weeks to prepare for its sole home tournament of the 2019-20 campaign when they welcome another highly competitive field for the 13th annual Lamkin Classic March 10-11 in Chula Vista, California. For the 11th time overall and 10th year in a row, San Diego Country Club will serve as host venue for the nationally recognized tournament.

After a two-week hiatus, SDSU will make a return trip to the Pacific Northwest for the Duck Invitational March 23-24 in Eugene, Oregon. The Aztecs will be strolling the vast tree-lined canopies of Eugene Country Club for the first time since the 2017 after placing eighth at Emerald Valley Golf Club last year.

The Scarlet and Black will venture outside of the Golden State for the second straight tournament when they head to the desert for the University of Wyoming’s Cowboy Classic April 6-7 at Whirlwind Golf Club in Chandler, Arizona. The Aztecs have competed at the event just once since 2000, sending a group of five individuals to Scottsdale in the spring of 2009.

SDSU will have one last tune-up before the conference tournament when it makes its 10th consecutive trek to the Santa Cruz area for the historic Western Intercollegiate April 13-15 at scenic Pasatiempo Golf Club. As part of a multi-year partnership announced last January, the Golf Channel will once again provide live broadcast coverage on all three days of the venerable meet, which is entering its 74th year.

After spending 12 of the last 13 years at OMNI Tucson National Golf Club in Arizona, the Mountain West Championship will be contested in the Evergreen State May 1-3 at Gold Mountain Golf Club in Bremerton, Washington, site of the conference tournament in 2018. SDSU will be seeking a return to the league’s top perch after capturing titles in 2011, 2012 and 2015.

This season's regional championships will be conducted over three days May 18-20 at six different venues, including The Farms Golf Club in Rancho Santa Fe, California, where the University of San Diego will serve as host school, while Norman, Oklahoma; Baton Rouge, Louisiana; Auburn, Alabama; Salem, South Carolina; and East Lansing, Michigan are possible destinations as well.

Should all the pieces fall into place, the Aztecs will be poised for a return to postseason competition after missing out on an NCAA regional appearance for the first time in 21 years last season.

If the Scarlet and Black advances to the NCAA finals, it will participate in the national championship series for the third time in the last six years, May 29-June 4, at Grayhawk Golf Club in Scottsdale, Ariz.