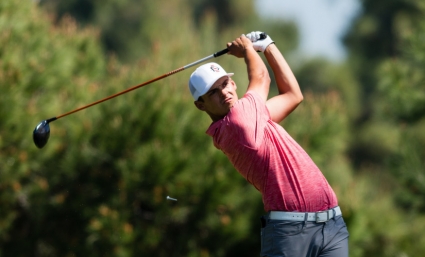 March 14, 2017 (Chula Vista) - San Diego State men’s golfer Blake Abercrombie finished in a tie for second place on the individual leaderboard Tuesday after shooting a 2-under-par 70 during the final round of the 10th annual Lamkin San Diego Classic at San Diego Country Club. With his result, the Aztec junior logged his fourth career top-five placement and second of the year, completing the tournament at 6-under-par 210.

As a team, the Aztecs climbed one spot into a tie for fifth, along with New Mexico, after posting a combined 1-under 287 during the final round for a 54-hole total of even-par 864. SDSU finished the week two shots behind three teams that tied for the runner-up position at 862 in North Carolina, Texas and Middle Tennessee, while Mississippi (-16) fired a blistering 15-under 273 on Tuesday to grab a lead it would not relinquish en route to capturing the team title.

Despite two bogeys on the back nine, Abercrombie was steady throughout most of the round, notching a team-high 12 pars to go with four birdies, including an impressive conversion on the par-3 No. 6, which ranked as the fifth-toughest hole of the tournament. With his performance, the Rocklin, Calif., finished in a three-way logjam for the runner-up position, along with Gavin Hall and Scottie Scheffler of Texas.

Ole Miss boasted the individual winner as well, with Ben Wolcott shooting a final-round 70 to capture medalist honors at 9-under 207, while Hidetoshi Yoshihara of UCLA and Eduardo Carrete of Saint Mary’s tied for fifth behind Abercrombie and the aforementioned Longhorns duo.

PJ Samiere just missed out on the top 10, tying for the 11th spot at 3-under 213 following a final-round 71. The  SDSU junior matched Abercrombie with 12 pars and four birdies of his own; however, a bogey-4 at No. 3 and a double-bogey-6 at No. 9 prevented a higher finish.

In addition, senior Nahum Mendoza III finished one stroke in back of Samiere in a tie for 16th at 2-under 214 after carding a 70 over the final 18 holes. The Francis Parker High alumnus led the team with six birdies on the day, including a successful drain on the par-4, 460-yard 18th, which ranked as the most difficult hole of the tournament. However, four bogeys proved costly.

The Aztecs’ two remaining starters senior Gunn Yang and sophomore Otto Vanhatalo finished the week in a tie for 69th at 12-over 228. Vanhatalo was unable to ease the sting of five bogeys, sinking just one birdie on the day for a final-round 76, while Yang was saddled with a 77 despite five birdies, including four on the back nine.

Rounding out the SDSU delegation were three individual competitors, including Pablo Matesanz, who jumped 19 places into a tie for 58th at 9-over 225 on the strength of a 71. The Aztec junior recorded four birdies, highlighted by an impressive make on the par-4, 401-yard No. 5, which ranked as the sixth-toughest hole of the tournament.

In addition, Brian Song wound up two strokes in back of Matesanz in a tie for 66th at 11-over 227 after shooting a 72 on Tuesday. The SDSU senior was 3-over at the turn, before finishing strong with four birdies on his back nine.

Meanwhile, freshman Ryan Hoffenberg completed the tournament in 88th place at 239 following a final-round 79, highlighted by a birdie at the perilous 18th.

San Diego State will enjoy a bye week before returing to the fairways for the Oregon Duck Invitational, March 27-28, in Eugene, Ore.