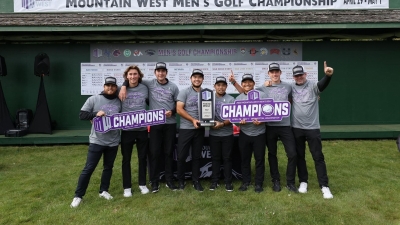 May 1, 2022 (Bremerton, Wash.) - The San Diego State men’s golf put together an incredible rally on the back nine to storm past Colorado State and claim the 2022 Mountain West Championship Sunday at the par-72, 7,115-yard Olympic Course at Gold Mountain Club. It was the fourth MW title for the Aztecs since 2011.

Early on in Sunday’s round, however, it looked like San Diego State would be playing for second. The Aztecs, who started two shots back from CSU, had two bogeys and a double bogey on the opening par-4, 460-yard first hole, and were at 5-over-par through the first nine and at 6-over through 10 holes. Colorado State, meanwhile, made the turn at 1-over and led SDSU by six strokes.

The Aztecs now have two team titles this year, both over the past three tournaments (also April 4-5 at the Wyoming Cowboy Classic).

Jin, meanwhile, made the turn at 3-over with no birdies, a double bogey on the first and a bogey on the ninth. Following three consecutive pars to start his back nine, Jin birdied five of the final six holes, including the par-4, 444-yard 13th, par-5, 513-yard 14th, the par-4, 355-yard 15th and the final two holes.

Sugimoto shot a 2-over 74 today and finished tied for 12th at 3-under 213. Sugimoto birdied both of the par 5s on the back nine but also had two bogeys in his round and a double bogey on the 15th.

Freshman Justin Hastings (Grand Cayman, Cayman Islands) logged a 7-over 79 and tied for 38th in his first MW Championship. Hastings managed only one birdie in the round, which came on the 14th, while also recording two bogeys and three double bogeys.

San Diego State will find out its destination for the NCAA Regionals on Wednesday, which GOLF Channel will announce at 1 p.m. PT.