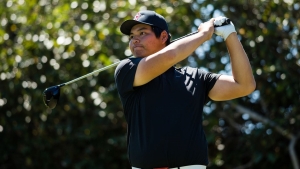 Aztecs tied for seventh after 36 holes

October 7, 2019 (Fairfax, Calif.) - The San Diego State men’s golf team finds itself in a tie for seventh place at the Alister MacKenzie Invitational after shooting a collective 14-under-par 554 during the first two rounds Monday at the historic Meadow Club.

Pepperdine fired a blistering 29-under 539 to grab a five-stroke lead over Saint Mary’s (-24), while host California (-22) occupies the third spot followed by Boise State (-19), heading into Tuesday’s final round on the par-71, 6,734-yard course layout.

After skipping SDSU’s last tournament to compete in the Asia-Pacific Amateur Championships, Puwit Anupansuebsai (Nakhom Phanom, Thailand) is back in the fold for the Scarlet and Black, landing in the 14th position on Monday with a combined 6-under 136. The Aztec junior opened with a 2-under 69, countering three bogeys with five birdies, before cleaning up his scorecard in the afternoon with a 67. The all-Mountain West selection offset a bogey at the par-4 10th with five additional drains, including a successful conversion at the par-4, 403-yard No. 3, which ranked as the third-toughest hole of the day.

With his performance, Anupansuebsai still remains nine shots off the pace after Sean Yu of San José State vaulted into the lead with a scintillating 15-under-par 127 on rounds of 61 and 66. In addition, Pepperdine’s Sahith Theegala (-12) sits in second, followed by Blake Hathcoat of Saint Mary’s (-10), Matthew McCarty of Santa Clara (-9) and San Diego’s Harrison Kingsley (-9).

Elsewhere, Leo Oyo (Tokyo, Japan) completed the first 36 holes just outside of the top-20, landing in a tie for 21st with a 4-under 138 after shooting a 68 and 70. The Aztec sophomore logged nine birdies overall, recording five on his first six greens after the turn in round two. However, two bogeys on his final three holes at the par-4 18th and the par-4 No. 2 prevented a loftier perch.

Lurking two shots behind Oyo are starters Steve Sugimoto (San Diego, Calif.) and Christian Banke (Danville, Calif.), who ended the day in a tie for 32nd at 2-under 140, joining teammate Newport Laparojkit (Montebello, Calif.), who is competing as an individual this week.

Sugimoto (69-71) and Banke (70-70) logged nearly identical rounds, tying for the team lead with 24 pars apiece, while both players notched seven birdies each.

A Rancho Bernardo High alumnus, Sugimoto sank four of his birdies in the afternoon, including an impressive drain on the par-4, 436-yard No. 7, which ranked as the fifth-most difficult hole of the day. However, the SDSU junior was saddled with a 71 after suffering a rash of four bogeys.

Banke, meanwhile, got off to a smooth start with three birdies on his first six holes in round one but experienced consecutive bogeys on the seventh and eighth greens before rebounding with eight pars through the turn to go with a birdie at No. 13. The Aztec junior also fought through some early adversity after carding back-to-back blemishes at No. 2 and No. 3 in the afternoon, playing spot-free golf the rest of the way, highlighted by birdies at No. 4, No. 13 and No. 16.

Similarly, Laparojkit matched Banke with consecutive 70s, recording seven birdies against four bogeys for the day, as well as one double bogey in round two. Among the SDSU senior’s birdies was a successful make at the par-4, 403-yard No. 3, which ranks as the fourth-toughest hole of the tournament thus far.

The Aztec starting five also included Callum Bruce (Banff, Scotland), who finished the day in a tie for 51st at 1-over 143 on rounds of 71-72. The SDSU junior drained five birdies in the morning session, including four in a six-hole stretch at Nos. 10-15; however, three bogeys as well as a double bogey at No. 9 sandbagged his round. Bruce managed just two birdies on his finished holes at No. 18 and No. 1 in round two, but it wasn’t enough to overcome the sting of three bogeys.

The Alister MacKenzie Invitational concludes on Tuesday when San Diego State tees off alongside Chattanooga, Long Beach State and San José State for the final round starting at 8 a.m. on hole No. 1.