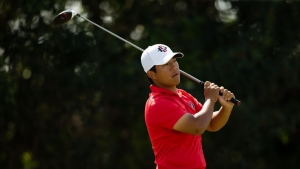 Aztecs in 16th place after 18 holes

February 18, 2019 (La Quinta, Calif.) - The San Diego State men’s golf team met with some adversity in its spring debut at The Prestige presented by Charles Schwab on Monday, landing in the 16th position after carding a collective 21-over-par 305 during the opening round on the par-71, 7,100-yard Greg Norman Course at PGA West.

In a highly competitive field, the Aztecs find themselves trailing a trio of top 50 teams that also struggled over the first 18 holes, remaining five shots behind No. 25 Arkansas (+16), which occupies the 12th spot, followed in succession by No. 35 Northwestern (+17) and No. 46 Iowa State (+18).

Individually, SDSU was paced by Otto Vanhatalo (Espoo, Finland), who finished the day in a tie for 35th place after shooting a 3-over 74. Making his first varsity start of the season, the Aztec senior played spot-free golf over his first eight holes, highlighted by three birdies, including back-to-back conversions on the 11th and 12th greens. The Torrey Pines High alumnus was unable to maintain the momentum, however, suffering four bogeys the rest of the way, as well as a double on the par-4 No. 3.

Steve Sugimoto (San Diego, Calif.) fired a 75 on Monday to finish the day one stroke behind Vanhatalo in a tie for 42nd. The SDSU sophomore found birdies elusive, posting just one circle on his scorecard at the par-4, 337-yard No. 11. In addition, the Rancho Bernardo High product could not ease the sting of five bogeys despite logging a team-high 12 pars.

Elsewhere, sophomore Christian Banke (Danville, Calif.) and freshman Youssef Guezzale ended the day in a tie for 66th after each carded a 78.

Following a bogey on his first hole at the par-4 10th, Banke followed with a birdie and six straight pars but faltered as the day progressed, suffering six additional bogeys to go with a double-bogey on the par-4 No. 1.

Guezzale, meanwhile, was plagued by inconsistency for most of the round, enduring three bogeys, two doubles and a triple, before finishing with birdies on the par-5 No. 8 and the par 4 No. 9.

Rounding out the Aztec lineup was freshman Leo Oyo (Tokyo, Japan), who finds himself in a tie for 75th after posting an 80, featuring two pars and a birdie on his final three holes.

Stanford’s Brandon Wu vaulted to the top of the individual leaderboard after firing a 65 on Monday, while LSU’s Garrett Barber, Utah’s Kyler Dunkle, and the Oklahoma State duo of Viktor Hovland and Austin Eckroat are all tied for second after each recorded a 68.

The Prestige presented by Charles Schwab continues Tuesday with the second round, as San Diego State tees off alongside Iowa State and UC Davis, starting at 8:36 a.m. PT on hole No. 10. Both the second and third rounds will be streamed live by Golfweek, with a link available on GoAztecs.com.