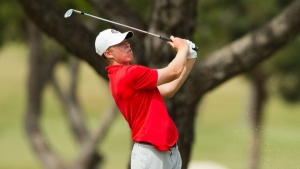 April 15, 2019 (Santa Cruz) - The San Diego State men’s golf team sits in ninth place at the Western Intercollegiate presented by Topgolf after shooting a collective 19-over-par 369 during the opening round at Pasatiempo Golf Club.

With their total, the Aztecs find themselves a distant 16 shots out of fifth place behind California (+4) and Stanford (+4), while Pepperdine (+6) remains in seventh, followed by Arizona (+9).

Tournament host San José State (-4) forged a two-stroke lead over a pair of second-place teams in USC (-2) and Oregon (-2), while Colorado State (+3) occupies the fourth spot heading into Tuesday’s second round on the par-70, 6,615-yard course layout.

Individually, SDSU was paced by Christian Banke (Danville, Calif.), who ended the day in a tie for 21st after shooting a 71. The Aztec sophomore sank a team-high five birdies, including a successful conversion at the par-3, 194-yard No. 5, which ranked as the sixth-toughest hole of the opening round. However, a triple bogey on the par-4 17th, coupled with a double bogey at the par-4 No. 2 and a bogey at the par-3 No. 8, prevented a loftier perch.

In addition, Otto Vanhatalo (Espoo, Finland) sits one shot behind Banke in a tie for 31st after firing a 72 for his second-lowest score in 10 rounds this year. The Aztec senior opened with a birdie on the par-4, 505-yard No. 1, which ranked as the fourth-most difficult hole of the day, adding two more drains on the 11th and 13th greens to offset a pair of bogeys at the par-3 No. 5 and the par-4 No. 10. After making a par-4 at the 14th, however, the Torrey Pines High alumnus had his momentum derailed with three additional bogeys on his final four holes.

Elsewhere, sophomores Puwit Anupansuebsai (Nakhon Phanom, Thailand) and Zihao Jin (Beijing, China) are tied for 55th after each carded a 75 replete with six bogeys apiece. Anupansuebsai managed to somewhat ease the sting of an opening double bogey with three birdies, including a successful make on the par-3, 217-yard No. 3, which ranked as the toughest hole of round one. Jin, meanwhile, posted a team-high 11 pars, including five on his last six holes to go with a birdie at the par-4 No. 16.

Making his third start of the spring, Youssef Guezzale (San Diego, Calif.) had his score figure in the Aztecs’ first-round total for the six-count-five event, shooting a 76 to tie for the 63rd position. After a birdie at No. 9 to get to 2-over for the day, the SDSU freshman reeled off five consecutive pars.  However, the La Jolla High grad was dogged by two bogeys at No. 15 and No. 18, along with a double bogey on the 16th green.

Finishing one stroke behind Guezzale was sophomore Steve Sugimoto (San Diego, Calif.), who recorded a 77 to finish the day in a tie for 71st. The Rancho Bernardo High alumnus sank two birdies, including an impressive drain at the par-4, 440-yard No. 10, which ranked as the second-most difficult hole of the first round. However, five bogeys and two double bogeys proved too much to overcome.

USC’s Justin Suh, the world’s No. 1 ranked amateur entering the week, sits in a three-way tie atop the leaderboard with San José State’s Sean Yu and Stanford’s Isaiah Salinda after each shot a 6-under 64, while fellow Trojans Sam Kim and Cameron Henry, an individual competitor, are tied for fourth at 4-under.

The Western Intercollegiate continues with second-round action on Tuesday as San Diego State tees off alongside Arizona, starting at 10:06 a.m. The Golf Channel will once again telecast live from Pasatiempo Golf Course between 4-7 p.m.