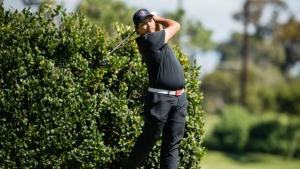 November 5, 2019 (Pebble Beach) - The San Diego State men’s golf team finds itself in a tie for ninth place at the Saint Mary’s Invitational after firing a combined 2-over-par 286 during second round on Wednesday at Poppy Hills Golf Club.

Despite matching its score from the previous round, the Aztecs dropped one place, joining Fresno State in the ninth spot at 4-over 572 for the tournament. As a result, SDSU trails a pair of sixth-place squads in San Francisco (+1) and Coastal Carolina (+1) by three strokes, while Oregon State (+3) occupies the eighth position heading into Wednesday’s final round on the par-71, 7,002-yard track.

Individually, Leo Oyo (Tokyo, Japan) remains in a tie for ninth place at 3-under 139 after shooting a 70 during the second round. Starting at the 10th tee, the Aztec sophomore sank a birdie on the par-4, 478-yard No. 14, which ranks as the second-toughest of the week, but bogeys on the 11th and 17th greens hindered his progress.

Oyo regrouped on his back nine, draining four birdies, including back-to-back conversions on the first and second holes to finish the day six shots off the pace behind front-runner Seth Taylor of Coastal Carolina (-9). In addition, Arizona’s Brad Reeves (-8) and Colorado State’s Parathakorn Suyasri (-8) lurk closely behind in second, while Brigham Young’s defending champion Peter Kuest (-7) is also in the mix.

Christian Banke (Danville, Calif.) finds himself five shots in back of Oyo in a tie for 39th at 2-over 144 after logging his second straight 72. The SDSU junior caught fire with four straight birdies before the turn, including an impressive make on the par-4, 414-yard No. 16, which ranks as the third-most difficult hole of the tournament.

However, Banke’s momentum was short-circuited thanks to a pair of double bogeys on the second and fifth greens, sandwiched around another bogey at No. 3. Despite the hiccup, he still managed to climb three places on the leaderboard after closing with three straight pars followed by a birdie on the par-5 ninth.

Puwit Anupansuebsai (Nakhon Phanom, Thailand) made the biggest leap for the Scarlet and Black, vaulting 26 places into a tie for 52nd at 4-over 146 after matching Oyo with a 70 on Tuesday. The Aztec junior shared the team-lead with five birdies, which helped ease the sting of two bogeys on the 10th and 15th greens, as well as double bogey at No. 5. Among his conversions were consecutive drains at No. 17 and No. 18, along with his finishing holes at the eighth and ninth.

Conversely, Steve Sugimoto (San Diego, Calif.) and Callum Bruce (Banff, Scotland) lost ground on the leaders during the second round.

Sugimoto slipped four places into a tie for 60th at 5-over 147 thanks to a 74. The SDSU junior experienced a wildly inconsistent day, suffering five bogeys and two double bogeys overall, which offset four birdies on his front nine. Still, the Rancho Bernardo High alumnus closed strong with back-to-back pars followed by an eagle on the par-5, 515-yard No. 9.

On the other hand, Bruce endured a more precipitous drop, plunging 22 places into a tie for 64th at 6-over 148 after settling for a 76. The junior transfer opened with two birdies, including a conversion on the par-3, 202-yard No. 11, which ranks as the sixth-most difficult hole of the week. However, the native Scot could only muster one additional drain on the par-3 eighth, as four bogeys and a quadruple bogey at No. 7 hastened his fall.

SDSU’s round of the day was actually turned in by an individual competitor, Zihao Jin (Beijing, China), who crept up four places into a tie for fifth with three other golfers at 4-under 138 after notching his second straight 69. The Aztec junior suffered two bogeys on the back nine at No. 11 and No. 13; however, four birdies kept him in contention heading into the final round.

The Saint Mary’s Invitational concludes on Wednesday when San Diego State tees off alongside Fresno State at 7:42 a.m. for the final round on hole No. 1.