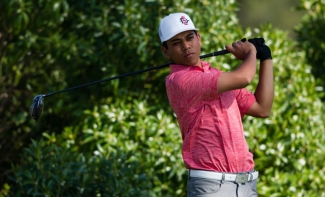 October 10, 2017 (Fairfax, Calif.) - The San Diego State men's golf team slipped two notches into fourth place at the Alister MacKenzie Invitational Tuesday after shooting a 3-over-par 287 during the final round at the historic Meadow Club.

With their total, the Aztecs concluded the 54-hole tournament at 19-under 833, finishing a distant 22 strokes behind champion California (-41), which captured the crown at its home event for the eighth time in the last nine years. In addition, Santa Clara (-24) climbed one spot into the runner-up position, followed by Arizona State (-20) and SDSU, while Nevada and Pepperdine tied for fifth at 17-under on the par-71, 6,734-yard loop.

For the third straight event, PJ Samiere (Kailua, Hawaii) was the Aztecs’ top golfer, posting a final-round 69 to finish alone in fifth at 12-under 201. The SDSU senior entered the day in a tie for third, but could not gain ground on the leaders despite carding three birdies against one bogey. Among his conversions was an impressive drain on the par-4, 403-yard No. 3, which ranked as the sixth-toughest hole of the week.

The remaining SDSU players were unable to improve upon their respective standings from the previous round as well, including Blake Abercrombie (Rocklin, Calif.), who slipped five spots into a tie for 14th at 5-under 208 after logging a 72 on Tuesday.  After sinking five birdies in each of previous two rounds, the Aztec senior managed just two over the final 18 holes. Despite the skid, Abercrombie still came away with his 10th career top-20 placement.

Sophomore Trevor Norby (Carlsbad, Calif.) also recorded his third top-20 finish in a Scarlet and Black uniform after tying for 19th with a career-best 4-under 209. The San Marcos High product maintained the same position from the second round, offsetting three bogeys with a trio of birdies, including a successful drain on the aforementioned third hole en route to a 71.

Puwit Anupansuebsai (Nakhon Phanom, Thailand) was not as fortunate, however, tumbling 16 places into a tie for 46th at 3-over 216 after logging a final-round 75. The Aztec freshman rode a wave of inconsistency over the first 10 holes, draining two birdies against four bogeys and a double before finishing strong with eight consecutive pars.

Elsewhere, Eric Ghim (Glendale, Ariz.) experienced a more precipitous drop, plunging 22 places into a tie for 68th at 8-over 221 on the heels of a 77. The SDSU sophomore was unable to generate any momentum, suffering four bogeys on the front nine, followed by a double at No. 12. Ghim went birdie-bogey on his next two holes, before closing out his round in positive fashion with four straight pars.

The Aztec contingency also included Pablo Matesanz (Irun, Spain), an unattached golfer who slid 15 places into 41st after shooting a 75.  The SDSU senior sank three birdies on the day to go with nine pars, but five bogeys and a double hastened his drop.

San Diego State resumes its fall schedule in just under three weeks when it travels to the Aloha State for the Warrior Princeville Makai Invitational, Oct. 29-31, in Princeville, Hawaii.