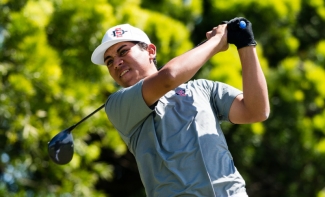 October 30, 2017 (Princeville, Hawaii) - Despite shooting its second straight collective score of 14-under-par 274, the San Diego State men’s golf team slipped one notch into fourth place on Monday during the second of the  Warrior Princeville Makai Invitational.

With their performance, the Aztecs have compiled a 36-hole total of 28-under 548, trailing first-place Louisville (-41) 13 strokes heading into Tuesday’s final round at the par-72, 7,228-yard Princeville Makai Golf Club. Missouri (-36) remains in second, while UCLA (-29) vaulted past the Scarlet and Black into third, thanks to a second-round low of 268. In addition, Sam Houston State (-26) occupies the fifth spot, while Wake Forest (-24) sits in sixth.

Individual scores dropped by over a stroke-and-a-half between the first and second-rounds (72.72 to 71.11), but only one SDSU golfer managed to gain ground on the leaderboard.

Returning to his home state, PJ Samiere (Kailua, Hawaii) shot a season-best 65 to climb 39 places into a tie for 15th at 6-under 138. The Aztec senior recorded eight birdies against one bogey, including a successful conversion on the par-5, 385-yard No. 4, which ranks as the fourth-most difficult hole of the tournament thus far.

With his round, Samiere remains four strokes behind teammate Blake Abercrombie (Rocklin, Calif.), who began the day with a share of the lead, but tumbled into the ninth position at 10-under 134 on the heels of a second-round 69. The SDSU senior was unable to maintain his lofty perch despite a team-high 13 pars. The Northern California native was at even-par after suffering a bogey-5 at No. 14, but finished strong with a par and three straight birdies, including an impressive drain on the par-4, 476-yard 17th, which ranks as the toughest hole of the week.

Consequently, Abercrombie finds himself seven shots behind front-runner Hayden Buckley of Missouri (_17, who carded a 61 on Monday, while Louisville’s Simon Zach (-15) sits two strokes of the pace in second, followed by Steven Fisk of Georgia Southern (-13), who catapulted 31 places in the standings thanks to a tournament-low 60.

Zihao Jin (Beijing, China) matched Abercrombie with a 69, but still slipped two places on the leaderboard into a tie for 15th along with his other teammate Samiere. The Aztec freshman sank five birdies of his own, including three straight on holes 14-16. However, two bogeys at the par-4 No. 6 and No. 17 hastened his drop.

In addition, sophomore Trevor Norby (Carlsbad, Calif.) experienced a sharper descent, falling out of the 13th position into a tie for 37th at 3-under 141 courtesy of a 72. Monday’s round started ominously for the San Marcos High alumnus, who notched a double-bogey on the par-4 No. 1. After regrouping with a quick birdie, Norby suffered another bogey on the par-5 fifth, derailing his momentum. However, Norby played spot-free golf the rest of the way, sinking birdies at the par-5 11th and the par-4 15th.

Elsewhere, Steve Sugimoto (San Diego, Calif.) logged his second straight 71 on Monday, but could not prevent a drop of 11 places into a tie for 45th at 1-under 143. Among the highlights for the Rancho Bernardo High product was an eagle-2 on the par-4, 359-yard No. 8, along with a birdie a birdie on the par-3 16th, which ranked as the fifth-toughest hole of the second round.

The final round of the Princeville Makai Invitational will be contested on Tuesday when San Diego State tees off once again with Louisville, Missouri and UCLA in a shotgun start, beginning at 11 a.m. PT.