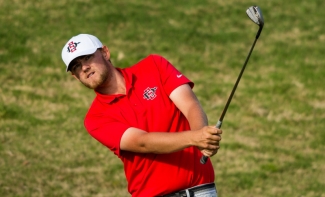 Aztecs slip six places in the standings after 36 holes

Photo:  Trevor Norby is tied for 11th after 36 holes at the MW Championship in Bremerton, Wash.  Courtesy goaztecs.com

April 22, 2018 (Bremerton, Wash.) - The San Diego State men’s golf team tumbled into seventh place at the Mountain West Championship on Saturday after posting a combined 15-over-par 303 during the second round at Gold Mountain Golf Club.

With their score, the Aztecs dropped out of a share of the lead, plunging six places in the standings with a 36-hole total of 11-over 587, heading into Sunday’s final round on the par-72, 7,115-yard Olympic Course.

After sinking a collective 11 birdies against zero bogeys over the final five holes on Friday, SDSU mustered just eight for the entirety of round two, as all five players lost ground on the individual leaderboard.

Sophomore Trevor Norby (Carlsbad, Calif.), who entered the day in a tie for fifth place along with teammate Blake Abercrombie (Rocklin, Calif.) was not immune to the trend, slipping six places into a tie for 11th at even-par 144 after shooting a 75.

Norby managed to offset three bogeys with birdies at No. 9 and No. 14; however, a double bogey on the par-4, 324-yard 18th hastened his drop.

With his round, Norby finds himself nine shots behind front-runner Shintaro Ban of UNLV (-9), who tied for the tournament low with a 67 on Saturday, while Nevada’s Grant Booth (-5) occupies the runner-up spot, followed by four golfers in a logjam for third place at 3-under, including San José State’s Sean Talmadge and Sean Yu, Colorado State’s AJ Ott and Nevada’s Joey Vrzich.

In addition, Abercrombie fell 11 spots into a tie for 16th at 2-over 146 courtesy of a second-round 77. The Aztec senior was just 1-over for the day after making birdie on the par-4, 378-yard No. 10, but four bogeys over the next six holes sealed his fate.

Despite posting a team-high three birdies, including back-to-back conversions on the fifth and sixth greens, PJ Samiere (Kailua, Hawaii) was unable to avoid a 10-place slide into a tie for 25th at 3-over 147. The Aztec senior was 2-under for the round after carding the aforementioned drains, but was forced to settle for 76, as seven bogeys proved too much to overcome.

Elsewhere, Puwit Anupansuebsai (Nakhon Phanom, Thailand) remains one behind Samiere in a tie for 27th at 5-over 149 after firing a 75. The Aztec freshman logged a team-leading 13 pars on Saturday to go birdies at No. 4 and No. 14; however, a triple bogey on the par-4, 444-yard 13th sandbagged his round.

The Aztec contingent also featured Pablo Matesanz (Irun, Spain), who ended the day in 54th place at 18-over 162 after stumbling to an 84. The SDSU senior found birdies elusive during the second round, but minimized the damage down the stretch with three pars on his last four holes.

None of the teams in the 11-school field finished with a collective red figure on Saturday. Still, UNLV (-4) took over sole possession of first place after recording an even-par 288, while Colorado State (+1) occupies the second position, followed by Fresno State and Wyoming, which are tied for third at 6-over for the tournament.

The Mountain West Championship concludes on Sunday when San Diego State tees off alongside San José State, starting at 9:20 a.m. on hole No. 1. A live scoring link, courtesy of Golfstat, will be available on GoAztecs.com.