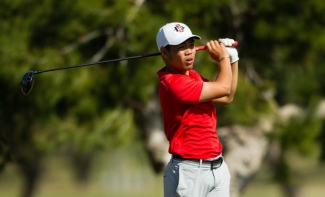 Photo:  Puwit Anupansuebsai shot the Aztecs' low round on Tuesday with a 72 at the Lamkin San Diego Classic.  Courtesy goaztecs.com

With their total, the Aztecs completed the 11th annual event at 2-over 866, finishing one stroke behind North Carolina and Ole Miss, both of which tied for fourth on the par-72, 7,033-yard track.

Oklahoma State (-44) captured the team title in a landslide after posting a tournament-low 267 over the final 18 holes, while Texas Tech (-12) was the distant runner-up, followed by Arizona (-4).

On a day when average individual scores increased from 73.74 to 74.21 between the second and final rounds, three of SDSU’s top four finishers lost ground on the leaderboard, including PJ Samiere (Kailua, Hawaii), who slipped four places into a tie for sixth at 6-under 210 after carding a 74. The Aztec senior tied for the team lead with four birdies, including back-to-back conversions on the 14th and 15th greens. However, three bogeys and an untimely triple-bogey on the par-4 No. 9 hastened his drop.

Despite, the stumble, Samiere still managed his fourth top-10 placement of the year, finishing nine strokes behind medalist Fredrik Nilehn of Texas Tech (-15), while the Oklahoma State trio of Viktor Hovland (-13), Matthew Wolff (-12) and Zach Bauchou (-12) grabbed the next three spots, respectively, followed by fifth-place Riley Elmes of Loyola Marymount (-8).

Blake Abercrombie (Rocklin, Calif.), who entered the day in a tie for 12th, also fell from contention, landing in a tie for 27th at 2-over 218 after shooting a 76. The SDSU senior opened with a birdie at No. 1, but gradually lost momentum, suffering six bogeys against one additional drain on the 14th green.

On the other hand, Puwit Anupansuebsai (Nakhon Phanom, Thailand) displayed upward mobility, climbing 11 places into a tie for 32nd at 3-over 219 after logging the Aztecs’ low score of the final round with a 72. The SDSU freshman tied Samiere with four birdies, including a pair of conversions on his first two holes. However, two bogeys and an inopportune double-bogey on the par-5 16th prevented a steeper ascent.

Meanwhile, fellow classmate Steve Sugimoto (San Diego, Calif.) experienced a precipitous drop of his own, tumbling 16 places into a tie for 44th at 5-over 221 on the heels of a 76. The Rancho Bernardo High alumnus made birdie on the par-3 No. 11 before recording an eagle-3 on the 14th green to help ease the sting of two bogeys and a double earlier in the round. However, a triple-bogey on the par-4 18th, which ranked as the toughest hole of the tournament, sealed his fate.

The Aztec starting five also featured sophomore Trevor Norby (Carlsbad, Calif.), who tied for 89th at 17-over 233 after posting his lowest round of the week with a 74. The San Marcos High product carded birdies on a pair of par-5 holes at No. 2 and No. 14 to go with 12 pars.

Rounding out the SDSU delegation were four individual competitors, including Torrey Pines High alumnus Otto Vanhatalo (Espoo, Finland), who landed in a tie for 62nd with a combined 8-over 224 after notching a final-round 75. The Aztec junior sank birdies on the fourth and 16th greens, but three bogeys and a double proved too much to overcome.

In addition, Zihao Jin (Beijing, China) finished five shots in back of Vanhatalo in a tie for 77th at 13-over 229 after shooting a 80 on Tuesday. The SDSU freshman was 8-over on the front nine, but rebounded with seven pars and a birdie on the par-4 No. 7 after the turn.

Elsewhere, fellow classmate Christian Banke (Danville, Calif.) completed the tournament one stroke behind Jin in a tie for 85th place at 230 following a final-round 81, while another freshman Ryan McCoy ended the day in a tie for 89th at 17-over 233 on the heels of an 82.

San Diego State will have 10 days to prepare for its next tournament when it competes in the K-State Bighorn Invitational March 23-24 at Bighorn Golf Club in Palm Desert Calif.

* - Competed as an individual