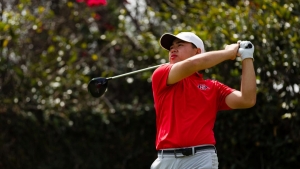 October 8, 2018 (Fairfax, Calif.) - The San Diego State men’s golf team sits in eighth place at the Alister Mackenzie Invitational after carding a 9-under-par 559 (287-272) on Monday during the first two rounds at the exclusive Meadow Club.

Despite trimming 15 strokes off their combined total with the fourth-best team score in the afternoon session, the Aztecs were unable to gain ground on the leaders, remaining four shots behind a pair of fifth-place squads in UC Davis (-13) and San Francisco (-13) heading into Tuesday’s final round on the par-71, 6,734-yard course layout.

Host California fired a blistering 36-under 532 to grab a six-stroke advantage over Pepperdine in the standings, while San José State occupies the third spot, followed by fourth-place Arizona State (-15).

Individually, SDSU sports two players among the top 20, including Youssef Guezzale (San Diego, Calif.), who finds himself in a five-way tie for eighth place at 6-under 136. The Aztec freshman, who led the team with 10 birdies on the day, opened with a 67, offsetting one bogey with five conversions, including an impressive drain on his finishing hole, the par-4, 403-yard No. 3.

Despite notching three additional bogeys en route to a 69 in the afternoon, Guezzale minimized the damage with five more birdies, highlighted by a successful make on the par-4, 443-yard No. 2, which ranked as the sixth-toughest hole of the day. With his effort, the La Jolla High product remains two shots behind Cal’s Kaiwen Liu and UC Davis’ Ryan Han, who are both tied for fifth at 8-under.

In addition, Aaron Whalen (Ephrata, Wash.) sits two strokes in back of Guezzale after finishing the first 36 holes in a tie for 17th place at 6-under 138. The SDSU junior settled for a 72 in round one, managing just two birdies against three bogeys, before his putter caught fire in the afternoon. As a result, the Washington State transfer vaulted 16 places on the leaderboard with a 66, thanks to six additional birdies, including an impressive conversion at the par-4, 363-yard No. 18, which ranked as the second-toughest green on Monday.

Sophomore Steve Sugimoto (San Diego, Calif.) also shaved six shots off his morning total, rebounding with a second-round 69 on the strength of a five-birdie card. After making bogey on the par-3 No. 8, the Rancho Bernardo High alumnus played spot-free golf the rest of the way, including birdies at the par-4 10th and the par-5 No. 13, to jump 13 places into a tie for 47th at 2-over 144 and help ease the sting of an opening-round 75.

Fellow classmate and former prep teammate Zihao Jin (Beijing, China) shook off some early rust as well, climbing 17 places into a tie for 53rd at 3-over 145 after firing a second-round 68. The Rancho Bernardo High product was saddled with a 77 in round one, but overcame a plague of seven bogeys with a steady stream of 13 pars and four birdies in the afternoon, including consecutive drains on the 15th and 16th greens.

The Aztec starting lineup also included Joey Moore (Billings, Mont.), who finished the day in a tie for 65th with a combined 5-over 147 on rounds of 73-74. The SDSU freshman sank four birdies in the morning, but suffered four bogeys as well as a double at No. 18. Moore responded with 14 pars and a birdie in round two; however, two additional bogeys and a double thwarted his progress.

Elsewhere, Christian Banke (Danville, Calif.) donned the Scarlet and Black as an individual competitor, finishing the day in a tie for 38th at 1-over 143 after shooting rounds off 73-70. The Aztec sophomore reached a red figure in the afternoon, countering two bogeys with three birdies, including back-to-back conversions on the par-4 sixth and the par-4 No. 7, the latter of which ranked as the fifth-toughest hole of round two.

Cal teammates Collin Morikawa (-13) and Sebastian Crampton (-12) occupy the top two spots in the medal chase, while Santa Clara’s Matthew McCarty and Pepperdine’s RJ Manke follow closely in a tie for third at 11-under 131. McCarty’s day was highlighted by a second-round 61.

The Alister Mackenzie Invitational concludes on Tuesday, with San Diego State teeing off alongside Saint Mary’s, UC Davis and San Francisco, beginning at 7:50 a.m. on hole No. 1. Live scoring will be available on GoAztecs.com.