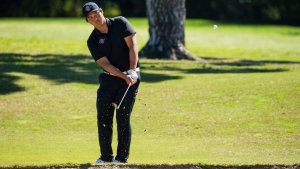 February 17, 2020 (La Quinta, Calif.) - The San Diego State men’s golf team is in eighth place after the first day of The Prestige presented by Charles Schwab after carding a 3-over-par 287 Monday on the par-71, 7,100-yard Greg Norman Course at PGA WEST.

In a highly competitive field which features 11 teams ranked in the top 45 in latest Golfstat rankings, the Aztecs are two shots ahead of No. 25 LSU (+5) and just two behind No. 22 UCLA and co-host UC Davis for fourth place (+1). No. 13 SMU and Iowa State, meanwhile, are tied for sixth at +2. Top-ranked Pepperdine leads the way at -9.

Sophomore Leo Oyo (Tokyo) and junior Christian Banke (Danville, Calif.) each shot under par in the first round and find themselves in the top 10. Oyo fired a 3-under 68 and is tied with three others in fifth place, two shots behind leader Joey Vrzich of Pepperdine. Oyo was particularly impressive down the stretch, going 5-under-par over the final 11 holes. For the day, Oyo had five birdies and an eagle on the par-5 16th hole. Oyo was the only competitor to record an eagle on the day.

Banke, meanwhile, carded a 2-under 69 to tie for ninth with seven other golfers. Like Oyo, Banke found his rhythm over the final 11 holes, going 6-under-par over that stretch, including five consecutive birdies from the eighth through the 12th holes. After back-to-back pars, Banke birdied both No. 15 and No. 16 before settling for a bogey and par to close out his 69.

Juniors Puwit Anupansuebsai (Nakhon Phanom, Thailand) and Callum Bruce (Banff, Scotland) each shot a 4-over 75 and are tied for 54th after the first round. Anupansuebsai, who entered the tournament with SDSU’s lowest scoring average (69.18), didn’t record a birdie until the par-5 16th hole and finished with 13 pars, three bogeys and a double-bogey 6 on the sixth hole.

Bruce, who shot a 3-over 38 on the front nine, started the back nine with four straight pars before birdieing the par-4 14th. After a par on No. 15, he double-bogeyed the par-5 16th and finished with back-to-back pars for his 75.

The Prestige presented by Charles Schwab continues Tuesday with the second round, as San Diego State tees off alongside Iowa State, SMU and UC Davis starting at 7:30 a.m. on hole No. 1.