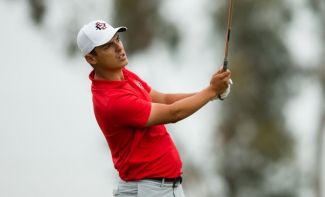 May 14, 2018 (Norman, Okla.) - The San Diego State men’s golf team remains in fifth place at the NCAA Norman Regional after posting a combined 2-over-par 290 on Monday during the opening round at Jimmie Austin OU Golf Club.

With their score, the Aztecs maintain a three-shot advantage over a pair of sixth-place squads in UMKC (+5) and Florida State (+5), heading into Tuesday’s second round on the par-72, 7,452-yard course layout.

Following three rounds of regional play, the top five teams in the Norman Regional will advance to the NCAA championship series, set for May 25-30 in Stillwater, Okla.

Host Oklahoma was the lone team to record a collective red figure Monday, shooting a 5-under 283 on its home course, while Auburn, Arkansas and North Florida are all tied for second at even-par 288, followed by SDSU.

Individually, the Aztecs were paced by senior Blake Abercrombie (Rocklin, Calif.), who finds himself in a seven-way tie for fourth place after firing a 2-under 70. The SDSU senior got off to a shaky start with three bogeys on his first four greens, but played spot-free golf the rest of the way, tying for the team lead with five birdies. Among his conversions was a successful make on the par-5, 594-yard No. 13, which marked the Scarlet and Black’s lone drain at that location on Monday.

With his total, Abercrombie, sits three shots behind front-runner Blaine Hale of Oklahoma (-5), while fellow Sooner teammate Quade Cummins and Arkansas’ William Buhl are tied for second at 3-under.

In addition, senior PJ Samiere (Kailua, Hawaii) ended the day in a tie for 11th after carding a 1-under 71. The two-time all-Mountain West performer collected four birdies of his own, including an impressive conversion on his finishing hole at the par-5, 586-yard No. 18 after making bogey on the 15th and 17th greens.

Elsewhere, Trevor Norby (Carlsbad, Calif.) is tied for 28th through 18 holes thanks to an opening-round 74. The Aztec redshirt sophomore notched two birdies, including a successful drain on the par-4, 445-yard No. 11, which ranked as the third-toughest hole on Monday. However, four bogeys, including three on the back nine, prevented a loftier perch.

A pair of freshmen made their regional debuts for the Scarlet and Black, including Steve Sugimoto (San Diego, Calif.), who shot a 75 to finish the day in a tie for 36th. The Rancho Bernardo High alumnus was 4-over for the round after suffering a bogey on the par-4 No. 10, but closed with a flourish, notching seven pars to go with a birdie on the par-4, 425-yard No. 16.

Meanwhile, fellow classmate Puwit Anupansuebsai (Nakhon Phanom, Thailand) remains one stroke behind Sugimoto in a tie for 51st after carding a 76. The Thai native matched Abercrombie with five birdies on the day, including back-to-back conversions on the eighth and ninth greens. However, six blemishes, including a triple bogey at the par-3 No. 6 and a double bogey on the par-4 17th, proved too much to overcome.

The NCAA Norman Regional continues on Tuesday when San Diego State tees off with North Florida and Florida State, beginning at 8 a.m. CT/6 a.m. PT on hole No. 10.