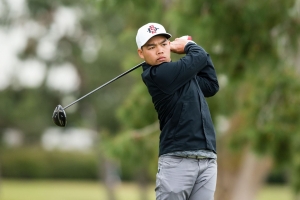 March 12, 2019 (Chula Vista) - Competing in its only home tournament of the season, the San Diego State men’s golf team finds itself in fifth place at the Lamkin San Diego Classic after shooting a combined 7-over-par 583 on Monday during the first two rounds at San Diego Country Club.

Battling wet and chilly conditions, the Aztecs posted scores of 288-295 to remain one shot behind fourth-place Saint Mary’s (+6) and eight strokes in back of North Carolina (-1) for third heading into Tuesday’s final round on the par-72, 7,033-yard layout.

With four starters among the individual top five, Arizona State (-15) catapulted to the top of the team standings, 10 shots in front of second-place Texas (-5), which was the only other school to finish with a red figure over the first 36 holes.

SDSU’s starting five was led by Puwit Anupansuebsai (Nakhon Phanom, Thailand), who landed in the 10th spot at even-par 144 on rounds of 69-75. The Aztec sophomore was plagued by a dearth of birdies during the afternoon session after recording five drains in round one, including successful conversions on his first two holes,

In addition, Leo Oyo (Tokyo, Japan) sits two shots behind Anupansuebsai in a tie for 18th at 2-over 146 after completing cards of 74-72. The SDSU freshman was 2-over for the second round after notching consecutive bogeys on the 12th and 13th greens but played spot-free golf the rest of the way, highlighted by back-to-back birdies at No. 14 and No. 15.

Elsewhere, Zihao Jin (Beijing, China) enjoyed a meteoric rise to near the top of the leaderboard after firing a team-best 68 in round one, which featured two birdies and an eagle on the par-5, 485-yard No. No. 14. However, the Aztec sophomore could not sustain the momentum in the afternoon, plunging into a tie for 26th at 3-over 147, as an uncharacteristic 79 hastened his drop.

Conversely, Joey Moore (Billings, Mont.) managed to climb 10 places into a tie for 58th at 8-over 152 despite shaving just two strokes off his first-round score, finishing with cards of 77-75. The SDSU freshman sank seven birdies on the day, including a successful make at No. 2 in the morning, but was plagued by inconsistency throughout with four bogeys and a double in each session.

Despite the onset of rain in the afternoon, fellow classmate Youssef Guezzale (San Diego, Calif.) improved as the day progressed jumping 16 places into a tie 63rd at 9-over 153 after shooting a second-round 73. The La Jolla High alumnus stumbled out the gates with an opening-round 80, but minimized the damage in round two, offsetting four bogeys with a trio of birdies, including two on his back nine.

The Aztecs were also represented by four individual competitors, including Christian Banke (Danville, Calif.), who finds himself tied for 10th with starter Anupansuebsai at even-par 144. The SDSU sophomore sank four birdies in each of his rounds of 71 and 73, including a drain at the par-4, 427-yard No. 9 in the morning, which ranked as the third-toughest hole of the day, to go with a make at the par-3, 236-yard No. 3 in round two, which ended up as the most difficult hole of the tournament thus far. However, a rash of seven bogeys overall prevented a loftier perch.

In addition, junior Newport Laparojkit (Montebello, Calif.) fired back-to-back rounds of 73-73 to finish the day in a tie for 18th with starter Oyo at 2-over 146.

The Lamkin San Diego Classic concludes on Tuesday when San Diego State tees off alongside Saint Mary’s and Ole Miss beginning at 8:54 a.m. on hole No. 1.