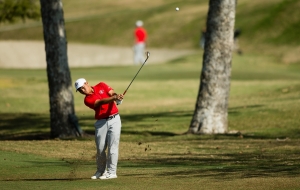 November 7, 2018 (Pebble Beach) - The San Diego State men’s golf team wrapped up its fall schedule with a seventh-place finish at the Saint Mary’s Invitational on Wednesday after shooting an even-par 284 during the final round at Poppy Hills Golf Course.

After climbing six places the previous day, the Aztecs were unable to gain further ground, completing the 54-hole tournament with a combined 7-over 859 on the par-71, 6,945-yard course layout. As a result, SDSU finished five strokes behind sixth-place Oregon (+2) and seven shots in back of fifth-place Colorado State (+1).

Leo Oyo (Tokyo, Japan) was the Aztecs’ top golfer, tying for 12th place at 2-under 211 despite stumbling to a 72 on the heels of Tuesday’s career-best round of 65. Beginning on the 10th tee, the SDSU freshman played steady if unspectacular golf for the most part, offsetting a bogey with three birdies, including a successful conversion on the par-4, 385-yard No. 5 to get to 2-under for the day. However, three additional bogeys on his four final holes hastened a fall of eight places on the leaderboard. Despite the drop, Oyo still logged his first collegiate top-20 placement in just his second varsity start.

The Aztecs’ remaining four players finished within six shots of one another, including Aaron Whalen (Ephrata, Wash.), who logged the team’s low round of the day with his second straight 70 to end the week in a tie for 30th at 3-over 216. The SDSU junior topped the squad with five birdies, highlighted by an impressive drain on the par-4, 414-yard No. 16, which ranked as the second-toughest hole of the tournament. Despite a double-bogey on the par-4 No. 3, Whalen still managed to climb 12 places in the standings.

In addition, freshman Youssef Guezzale (San Diego, Calif.) saved his best for last, carding a final-round 71 to finish one shot behind Whalen in a tie for 36th at 4-over 217. The La Jolla High alumnus countered three bogeys with a trio of birdies, including a successful make on his final hole at the par-5 ninth to jump six places on the leaderboard.

Conversely, Puwit Anupansuebsai (Nakhon Phanom, Thailand) tumbled 10 spots into a tie for 39th at 5-over 218 after carding a 74 on Wednesday. Despite four birdies, including consecutive drains on the 17th and 18th greens, the Aztec sophomore was plagued by inconsistency, suffering five bogeys as well as a double on the par-3 No. 6, which precipitated his drop.

Rounding out the SDSU starting five was Zihao Jin (Beijing, China), who moved up 17 places into a tie for 51st at 9-over 222 after matching Guezzale with a final-round 71. The Aztec sophomore opened with consecutive birdies on the par-4 10th and the par-3 11th, which ranked as the third- and fourth-most difficult holes of the tournament, respectively. He also closed with a birdie at No. 9, but three bogeys in the interim prevented a steeper ascent.

The SDSU delegation also featured sophomore Steve Sugimoto (San Diego, Calif.), an individual competitor who slipped 16 places into a tie for 45th at 8-over 221 after shooting a final-round 77. The Rancho Bernardo High product stumbled out of the gates with four bogeys and a double on the front nine but rebounded nicely after the turn, draining a birdie at the par-5, 527-yard No. 1 followed by seven pars on his last eight holes.

The Aztecs will take a three-month break from competition before opening their 2019 spring schedule at The Prestige at PGA West Feb. 18-20 in La Quinta, Calif.