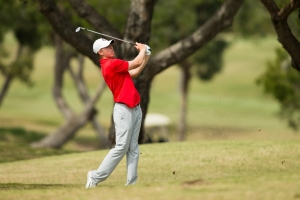 September 29, 2018 (Albuquerque) - The San Diego State men’s golf team completed its second tournament of fall campaign with a sixth-place finish on Saturday at the William H. Tucker Intercollegiate after posting a combined 2-over-par 290 during the final round at UNM Championship South Course.

Despite recording a team score five shots higher than their figure in round two, the Aztecs still managed to climb one notch in the standings with a 54-hole total of 3-over 867 on the par-72, 7,555-yard track.

With its result, SDSU finished seven strokes behind fourth-place Arkansas (-4) and four shots in back of fifth-place New Mexico (-1) in the field of 17 schools. Brigham Young (-16) tied for the low round of the day with a 5-under 283 to capture the team title over second-place UNLV (-14), which led after round two, while Pepperdine (-13) followed closely in third.

The Aztecs were led by freshman Joey Moore (Billings, Mont.), who vaulted 27 places on the individual leaderboard to tie for the 19th position after firing a team-best 69 during the final round. The two-time Montana Class AA state prep champion played spot-free golf on Saturday, sinking three birdies, including a successful make on his finishing hole at the par-4, 428-yard No. 6.

With his card, Moore finished 12 strokes behind co-medalists Harry Hall of UNLV and Peter Kuest of Brigham Young, who each completed the tournament at 11-under 205. In addition, Pepperdine’s Joshua McCarthy (-7) shot a third-round-low 66 to catapult into the third position, while Arkansas’ Mason Overstreet and New Mexico’s Sam Choi tied for fourth at 5-under.

Like Moore, sophomore Steve Sugimoto (San Diego, Calif.) also displayed upward mobility for the Scarlet and Black, leaping seven places into a tie for 32nd at 3-over 219 thanks to an even-par 72. The Rancho Bernardo High alumnus suffered just one blemish on his scorecard, a double-bogey at the par-3 No. 8, but minimized the damage with 15 pars to go with back-to-back birdies on the 17th and 18th greens.

However, Puwit Anupansuebsai (Nakhon Phanom, Thailand) experienced the opposite fate, tumbling 13 places into tie with Sugimoto following a final-round 76. The SDSU sophomore was unable to overcome a rash of five bogeys, but still finished on a strong note, posting four pars and one birdie at the par-5, 544-yard No. 1, his third-to-last hole of the day.

Elsewhere, Christian Banke (Danville, Calif.) logged a 73 over the final 18 holes to climb nine places into a tie for 43rd with a collective 6-over 222. The Aztec sophomore witnessed smooth sailing for the most part, logging 15 pars while offset two bogeys with a birdie at the par-3, 220-yard No. 11, which ranked as the fifth-toughest hole of the tournament.

On the heels of a second-round 66, freshman Youssef Guezzale (San Diego, Calif.) could not sustain the same momentum on Saturday, plunging 32 places into a tie for 58th at 9-over 225 after his final-round total ballooned to 80. Despite three birdies, the La Jolla High product was plagued by inconsistency throughout, including a double bogey at the par-4, No. 2, which put him at 8-over for the day.

The San Diego State contingent also featured a pair of individual competitors in sophomore Zihao Jin (Beijing, China) and freshman Leo Oyo (Tokyo, Japan). After finishing Friday’s action in a tie for eighth, Jin slipped 11 places into a tie for 19th with starter Moore thanks to a final-round 76. The Rancho Bernardo High alum drained three birdies but was unable to overcome the sting of six bogeys.

On the other hand, Oyo found birdies elusive on Saturday, dropping 16 places into a tie for 83rd at 18-over 234 after stumbling to an 83.

San Diego State will have the next nine days off from competition before returning to the fairways north of the Golden Gate Bridge for the Alister Mackenzie Oct. 8-9 at the historic Meadow Club in Fairfax, Calif.