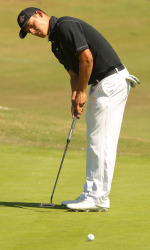 September 10, 2016 (Independence, Minn.) - With four players among the individual top 20, the San Diego State men’s golf team vaulted into the lead at the Gopher Invitational on Saturday after shooting a collective 3-over-par 571 during the first two rounds at the par-71, 7,388-yard Windsong Farm Golf Club.


With their total, the Aztecs own a slim one-shot advantage over Arkansas (+4) and Oklahoma (+4) heading into Sunday’s final round. Kent State and Michigan State also remain in contention, sharing the fourth position at 8-over, while California finds itself in sixth at 12-over.

Individually, SDSU was paced by Blake Abercrombie (Rocklin, Calif.), who fired a collective 1-under 141 on rounds of 70-71 to forge a four-way tie for fifth with Oklahoma’s Grant Hirschman and Blaine Hale and Ben Doyle of California. Abercrombie converted two eagles on the day, notching a successful conversion on the par-5, 549-yard No. 18 in the morning, followed by another make on the par-4 499-yard 15th in the afternoon session. The Aztec junior also drained six birdies overall and sits just two shots off the pace.

Sam Weatherford of Michigan State moved up two places in the second round to grab the individual lead at 3-under 139, while the Arkansas duo of Alvaro Ortiz and Dylan Naidoo lurk one shot behind in the No. 2 spot, along with Raymond Knoll of Iowa.

In addition to Abercrombie’s performance, SDSU seniors Gunn Yang (Pyeonchang, South Korea) and Nahum Mendoza III (San Diego, Calif.) finished the day in a tie for 11th after each shot a 1-over 143. Yang topped the squad with a combined seven birdies, including four in the second round, while Mendoza played steady golf, leading the entire field with 29 pars on 36 holes.

Elsewhere, PJ Samiere (Kailua, Hawaii) finds himself just one stroke in back of Yang and Mendoza in a tie for 16th at 2-over 144 after logging consecutive 72s. The Aztec junior was also a model of consistency with 26 pars overall to go along with four birdies, including an impressive drain on the par-4, 450-yard 14th in round one, which ranked as the fourth-toughest hole on Saturday.

Rounding out the SDSU contingent was true freshman Eric Ghim (Glendale, Ariz.), who wound up in a tie for 66th after firing a 13-over 155 (76-79) in his first two collegiate rounds.

The Aztecs also have five golfers competing in the auxiliary Gopher Invitational individual tournament, being conducted at the par-72, 6,953-yard Pioneer Creek Golf Course in Maple Plain, Minn. Senior Brian Song (Beverly Hills, Calif.) owns a share of the lead with Bjarki Petursson of Kent State after carding a 4-under 140 (69-71), which featured a combined seven birdies, including three straight on holes 9-11 in the opening round.

Sophomore Otto Vanhatalo (Espoo, Finland) also finds himself in the mix two shots behind the leaders in a three-way tie for fourth at 2-under 144, while junior Pablo Matesanz (Irun, Spain) occupies the ninth position at 1-over 145, followed by freshman Ryan Hoffenberg (Simi Valley, Calif.), who fired a 4-over 148 to land in a tie for 16th, and redshirt freshman Trevor Norby (Carlsbad, Calif.), sits alone in 19th at 5-over 149.

As a team, San Diego State will tee off alongside Arkansas, Oklahoma and Kent State for the final round of the Gopher Invitational on Sunday, beginning at 8:30 a.m. CT/6:30 a.m. PT.

View player results through the second round here.

*Note:  all schools, not just SDSU, included in both documents