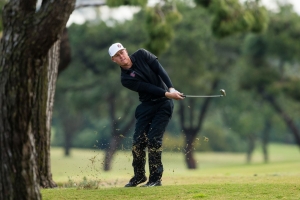 In their second tournament of the fall campaign, the Aztecs registered scores of 281-289 to finish the day eight strokes behind front-runner Arizona (-14), while host New Mexico (-13) occupies the second spot followed by Brigham Young (-9) heading into Saturday’s final round on the par-72, 7,555-yard South Course.

Christian Banke is SDSU’s top golfer through s36 holes after shooting a 5-under par 139 on rounds of 67-72.  The Aztec junior tied his collegiate best in the morning session, sinking four birdies against one bogey to go with an eagle on the par-5, 579-yard 14th. He also had an impressive drain earlier on the par-4, 517-yard No. 10, which ranked as the toughest hole of the day.

Banke added five more birdies in the afternoon, including his finishing hole at the par-4, 376-yard No. 4. However, five bogeys prevented a higher perch. As a result, the northern California native remains six shots off the pace along with New Mexico’s Galven Green, trailing 2018 champion Peter Kuest of Brigham Young, who carded an 11-under 133 (63-70), while Arizona’s Trevor Werbyko (-7) landed in the second position one stroke ahead of UNLV’s Jack Trent.

Leo Oyo (Tokyo, Japan) was the only other SDSU competitor to finish in red figures Friday, logging a 3-under 141, thanks to rounds of 71-70. The Aztec sophomore managed to ease the sting of four bogeys with five birdies in the morning, highlight by consecutive makes on the 14th and 15th greens. Oyo cleaned things up in the afternoon, offsetting two bogeys with a pair of birdies as well as an eagle on the aforementioned par-4 360-yard No. 15. With his result, the 2019 U.S. Amateur participant finds himself just two shots in back of teammate Banke.

In addition, Steve Sugimoto (San Diego, Calif.) and Callum Bruce (Banff, Scotland) completed the first day of competition in a tie for 33rd after each fired a 2-over 146.

Sugimoto countered three bogeys with a trio of birdies in round one; however, a double bogey on the par-4 fifth, saddled him with a 74. The Aztec sophomore responded with a 72 in the afternoon, recording three additional birdies against three bogeys.

Bruce, meanwhile, opened with a 3-under 69, playing spot-free golf after carding two bogeys on his first three holes. The SDSU junior drained consecutive birdies at No. 10 and 11, which ranked among the six most-difficult greens of the day, before making eagle on the par-5, 544-yard 18th. However, the Midland College transfer was unable to maintain the momentum in round two, stumbling to a 77, thanks to four bogeys and a double bogey on the par-3 16th.

Rounding out the Aztec starting five was Zihao Jin (Beijing, China), who shot a collective 9-over 153 to finish the day in a tie for 69th. The SDSU junior logged an opening-round 78 that was hampered by five bogeys and a double bogey on No. 15, before settling for a 75 in the afternoon. The Rancho Bernardo High alumnus sank two birdies to go with 11 pars, but five additional bogeys prevented a greater recovery.

San Diego State will tee off alongside Arizona, New Mexico and BYU for Saturday’s final round at the William H. Tucker Intercollegiate, which commences in a shotgun start at 7:45 a.m. MT/6:45 a.m. PT.