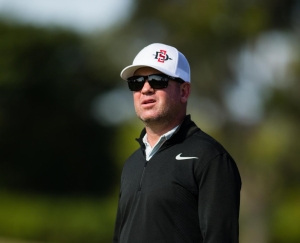 Entering his 16th year, Donovan has coached the Scarlet and Black to 170 top-10 overall tournament finishes, 119 top-five performances, 30 team titles and six NCAA championship appearances, highlighted by a fifth-place tie at nationals in 2012. During his tenure, SDSU has advanced to the NCAA regionals every season with the aforementioned streak of 20 straight postseason bids. The Aztecs have also finished no worse than second at the Mountain West Championship in six of the last nine seasons, winning team titles in 2011, 2012 and 2015.

"I am very excited for the opportunity to continue and lead the men's golf program at San Diego State," Donovan said. "We are so thankful for the support of our administration, community and alumni. We take pride in competing for championships and graduating our student-athletes. I am an "Aztec for Life" and we look forward to build on the tradition of excellence that has been established here.

Under Donovan's guidance, SDSU golfers have garnered 31 all-Mountain West accolades and 15 all-region honors, while seven of his pupils have been named to 13 All-America teams. In addition, Donovan has mentored three MW Player of the Year winners in Nahum Mendoza III (2016), J.J. Spaun (2012) and Aaron Goldberg (2008), as well as a trio of conference Freshmen of the Year recipients in Ricky DeSantis (2014), Riccardo Michelini (2013) and Matt Hoffenberg (2008).

Donovan received Mountain West Coach of the Year recognition on three occasions and was twice named a finalist for the Dave Williams Award, which is handed out annually to the national coach of the year in Division I men’s golf. Donovan was also was tabbed the Eaton Golf Pride West Region Division I Men’s Coach of the Year by the Golf Coaches Association of America (GCAA) following the 2010-11 campaign.

Prior to his appointment at San Diego State, Donovan was a four-year member of the Aztec golf squad from 1997-2001 before joining the professional ranks on the Golden State Tour in 2001 and the Gateway Tour in 2002. His most successful season in a Scarlet and Black uniform came as a junior when he recorded five top-30 placements.

A native of Yorba Linda, Calif., Donovan also qualified for the U.S. Amateur in 1996 and 1999, and played in the British Amateur in 2001 before turning pro.  He returned to The Mesa as an assistant coach under former head coach Dale Walker, but was later promoted to interim head coach after the conclusion of the 2003 fall season and piloted SDSU through the entire 2004 spring campaign.

Donovan and the Aztecs open their 2018 fall schedule next month when they travel to the Land of 10,000 Lakes for the Gopher Invitational, Sept. 9-10, at Windsong Farm Golf Club in Independence, Minn.