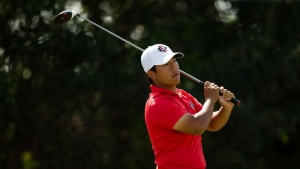 With their total, the Aztecs find themselves eight shots behind Wyoming and Seattle, which are tied for the fifth spot at 12-over 588, while San Francisco and San José State are knotted in the seventh position at 17-over 593, heading into Tuesday’s final round on the par-72, 7,145-yard course layout.

Tournament host Oregon and intrastate rival Oregon State share the lead atop the team standings at 1-over 577, while Nevada (+4) sits in third, followed by Boise State (+9).

Individually, SDSU’s top four golfers are within five shots of one another, led by Christian Banke (Danville, Calif.), who finished the first 36 holes in a tie for 24th at 3-over 147 on rounds of 73-74. After suffering a rash of four bogeys before the turn in the morning, the Aztec sophomore played spot-free golf over his final 10 holes, highlighted by birdies on the first and third greens.

Banke also recorded a successful drain on the par-3, 211-yard No. 11 in round two, followed by another conversion at the par-5 third, which brought him back to even. However, two bogeys down the stretch stymied his advance.

In addition, Puwit Anupansuebsai (Nakhon Phanom, Thailand) sits two shots behind his SDSU teammate in a tie for 36th with a 5-over 147. The Aztec sophomore matched Banke with a 73 in the first round, completing an unblemished back nine, featuring birdies on the fourth and ninth greens. However, Anupansuebsai was unable to sustain the momentum in the afternoon, suffering an untimely double bogey just before the turn on the par-5 18th on the way to a 76.

Leo Oyo (Tokyo, Japan) fired San Diego State’s low round of the day with an opening-round 71, which vaulted him to the sixth spot on the leaderboard. After recording three drains, including back-to-back makes on the eighth and ninth greens following the turn, the Aztec freshman found birdies elusive in round two, stumbling to a 79, which dropped him into the 44th position despite notching nine pars on his final 10 holes.

Conversely, Steve Sugimoto (San Diego, Calif.) displayed upward mobility between the first and second rounds, climbing 21 spots into a tie for 52nd at 8-over 152. The SDSU sophomore was saddled with a 78 in the morning, plagued by three bogeys and two double bogeys on a pair of par-3s. However, the Rancho Bernardo High alumnus scraped off the rust with three birdies, including an impressive drain on the par-4, 424-yard No. 12, which ranked as the fourth-toughest hole of the day. However, a double-bogey on the par-4 ninth prevented a steeper ascent and forced him to settle for a 74.

The Aztec starting five also included Joey Moore (Billings, Mont.), who finds himself tied for 72nd at 12-over 156 on rounds of 79-77. The SDSU freshman drained three birdies, including a successful make in the morning on the par-4, 405-yard No. 4, which ranked as the fifth-most difficult hole of the day.

Cameron Kaneko of Hawai’i took over the individual lead after carding a 4-under 140 on Monday, while Oregon’s Ryan Gronlund (-2) remains two shots off the pace in second, while Nevada’s Sam Meek, Boise State’s Brian Humphreys and Oregon State’s Spencer Tibbets are all tied for third at 1-under.

The Duck Invitational wraps up on Tuesday when San Diego State tees off alongside Hawai’i, Denver and Oral Roberts for the final round, beginning with a shotgun start at 8:15 a.m. on holes 9-12.