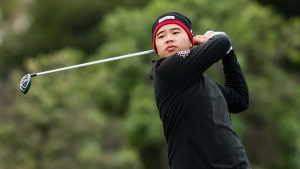 April 16, 2019 (Santa Cruz) - The San Diego State men’s golf team remains in ninth place at the Western Intercollegiate presented by Topgolf after posting a combined 14-over-par 364 on Tuesday during the second round at Pasatiempo Golf Club.

Despite trimming five strokes off their aggregate score from round one, the Aztecs were unable to gain on the leaders and finished the day with a 36-hole total of 33-over 733, trailing eighth-place Arizona (+18) by a distant 15 shots heading into Wednesday’s final round on the par-70, 6,615-yard track.

Tournament host San José State (-1) maintained its perch atop the standings, while Stanford (E) lurks closely behind in the second spot, followed by third-place occupants USC (+5) and California (+5).

Individually, SDSU was led by Christian Banke (Danville, Calif.) and Otto Vanhatalo (Espoo, Finland), who tied for team-low honors after each recorded a 71.

Banke managed to ease the sting of four bogeys with a trio of birdies, including an impressive conversion on the par-3, 217-yard No. 3, which ranks as the most difficult hole of the week thus far. With his card, the Aztec freshman climbed three places on the leaderboard into a tie for 18th at 2-over 142.

In addition, Vanhatalo displayed upward mobility, jumping seven spots into a tie for 25th at 3-over 143 with nine other golfers. The Torrey Pines High alumnus hit a snag with a double bogey at No. 3 and a bogey at No. 5 but played spot-free golf the rest of the way, highlighted by a pair of birdies. Among his drains was a successful make on the par-4, 440-yard 10th green, which ranks as the second-most difficult hole of the tournament.

Despite shaving a stroke from the previous day, Puwit Anupansuebsai (Nakhon Phanom, Thailand) slipped two notches into a tie for 57th at 9-over 149 on heels of a second-round 74. The SDSU sophomore was 5-over for the day after recording a double bogey at No. 3 and three additional bogeys on the front nine. However, Anupansuebsai quickly rebounded with eight pars down the stretch to go with a birdie on the par-4, 396-yard No. 16.

Through 36 holes, Steve Sugimoto (San Diego, Calif.) and Zihao Jin (Beijing, China) sit one shot in back of Anupansuebai in a tie for 62nd at 10-over 150 after each took a different path their placement.

Sugimoto climbed nine steps on the leaderboard, thanks to a 73 that featured three birdies against four bogeys and one double bogey. After making bogey at the par-4 11th, the Aztec sophomore finished without a blemish on his scorecard, knocking down six pars to go with a birdie at the par-3 No. 16.

Conversely, Jin slipped seven spots after notching his second straight 75. The SDSU sophomore drained one birdie at No. 11 but was handcuffed by one double bogey and four bogeys, including three on the back nine.

The Aztecs were also represented by Youssef Guezzale (San Diego, Calif.), who dropped 13 places into a tie for 76th at 14-over 154 after shooting a 78 on Tuesday. The SDSU freshman logged birdies on the No. 4 and No. 14 greens to go with 10 pars. However, two costly triple bogeys and four additional bogeys precipitated his fall.

In the race for the coveted blue jacket, Stanford’s Isaiah Salina (-8) opened up a three-shot lead over four golfers, including SJSU’s Kevin Velo and Sean Yu, along with Pepperdine’s Clay Feagler and unattached USC competitor Cameron Henry, all of whom sit and 5-under.

The Western Intercollegiate concludes on Wednesday as San Diego State tees off alongside Washington, UTEP and UC Irvine starting at 8:54 a.m. on hole No. 10. The Golf Channel will once again telecast live from Pasatiempo Golf Course between 1-4 p.m.