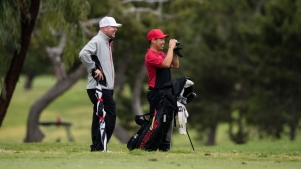 SDSU hasn’t played competitively as a team since tying for second at the Lamkin San Diego Classic on March 9-10, 2020 before the rest of the competitive spring season and the fall campaign was canceled due to the COVID pandemic.

The Aztecs then make their 11th consecutive appearance at The Prestige presented by Charles Schwab, Feb. 15-17, at PGA West in La Quinta, Calif. As a team, SDSU finished third out of 16 teams a year ago, defeating the likes of No. 9 Texas Tech and perennial power Oklahoma State after finishing in last in the 2019 tournament.

San Diego State will have three weeks to prepare for its sole home tournament of the 2021 campaign when it welcomes another highly competitive field for the 14th annual Lamkin Classic, March 8-10, in Chula Vista, Calif. For the 12th time overall and 10th year in a row, historic San Diego Country Club will serve as the host venue for the nationally recognized tournament. As previously mentioned, the Aztecs tied for second at last year’s Lamkin San Diego Classic.

A little under two weeks later, SDSU will compete at the National Invitational Tournament (NIT), March 20-21, at Sewailo Golf Club in Tucson, Ariz. San Diego State finished ninth in its last entry at the NIT in 2019. Former Aztec Xander Schauffele tied for second out of 83 participants in SDSU’s previous trip there in 2015.

The Scarlet and Black will venture outside of the Golden State for the second straight tournament when they head to the desert for the University of Wyoming's Cowboy Classic, April 5-6, at Whirlwind Golf Club in Chandler, Arizona. San Diego State was supposed to compete at the event for the first time since 2000 last year before COVID ultimately shut the season down. The Aztecs did send a group of five individuals to the classic in the spring of 2009.

SDSU will have one last tune-up before the conference tournament when it makes its 10th consecutive trek to the Santa Cruz area for the Western Intercollegiate, April 12-14, at scenic Pasatiempo Golf Club. The Golf Channel will once again provide live broadcast coverage on all three days of the venerable meet, which is entering its 74th year after being canceled in 2020.

The Mountain West Championship will once again take place at OMNI Tucson National Golf Club in Tucson, Ariz., making it 13 of the last 14 years at the site. San Diego State has won league titles in 2011, 2012 and 2015.

This season's regional championships will be conducted over four days, May 16-19, at six different venues, including courses in Albuquerque, N.M.; Nashville, Tenn.; Stillwater, Okla.; Cle Elum, Wash.; Noblesville, Ind.; and Tallahassee, Fla. The Aztecs will be looking for their 21st NCAA regional appearance over the last 22 chances (2020 NCAA regionals were canceled).

If the Scarlet and Black advances to the NCAA finals, it will participate in the national championship series for the third time in the last six championships, May 28-June 2, at Grayhawk Golf Club in Scottsdale, Ariz.