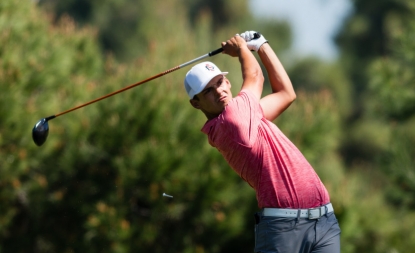 For the second straight year, the Aztecs will venture to the Land of 10,000 Lakes for their season opener when they compete in the Gopher Invitational, Sept. 10-11, at Windsong Farm Golf Club in Independence, Minnesota, situated just west of Minneapolis. Last season, SDSU finished a strong second behind eventual national champion Oklahoma in their initial appearance at the event, with all-Mountain West selection Blake Abercrombie (Rocklin, Calif.) occupying the seventh spot on the individual leaderboard.

Subsequently, the Aztecs will make their annual trek to the Land of Enchantment for the William H. Tucker Intercollegiate, Sept. 22-23, in Albuquerque, New Mexico. SDSU captured its first team title of the season last year in the Duke City, posting a 10-shot victory over Mountain West rival Colorado State, as four players placed among the top 15, including all-West Region performer PJ Samiere (Kailua, Hawaii), who finished a solo second.

Following a two-week respite, the Aztecs will visit another familiar course when they travel to the Bay Area for the Alister Mackenzie Invitational, Oct. 9-10, in Fairfax, California, just north of San Francisco in rural Marin County. Last season, Samiere recorded the fourth-lowest 18-hole total in program history after carding a career-best 64 at the exclusive Meadow Club.

San Diego State will then make its first excursion to the Aloha State in five years when it participates in the Warrior Princeville Makai Invitational, Oct. 29-31, in Princeville, Hawaii, located on the island of Kaua’i. The Aztecs last competed at the event in 2012, with future PGA Tour competitor Xander Schauffele finishing as the team’s top golfer with a 26th-place standing.

SDSU will put the finishing touches on its busy fall schedule the following week when it competes in the Saint Mary’s Invitational, Nov. 6-8, in exclusive Pebble Beach, California. The Aztecs will be aiming for their third straight team title at the renowned Poppy Hills Golf Course after withstanding some early difficulty last season to win comfortably by 12 strokes. Three players finished among the top six at the event, including Samiere, who landed in the runner-up spot on the strength of consecutive 67s over the final two rounds.

After a near three-month hiatus, San Diego State will get an early jump on its 2018 spring slate, traveling to the desert for the Arizona Intercollegiate, Jan. 29-30, in Tucson. The Aztecs did not compete in the tournament at Sewailo Golf Club last year, as Oregon took home the crown with a 12-shot triumph over runner-up Pepperdine.

Three weeks later, the Scarlet and Black will make its seventh straight appearance at The Prestige at PGA West Feb. 19-21, in La Quinta, California. SDSU is coming off a sixth-place tie at the venue’s Greg Norman Course last season after posting consecutive third-place finishes in 2015 and 2016.

Five days later, the Aztecs will be back in action for the Southwestern Invitational, Feb. 26-27, in Westlake Village, California, as the Scarlet and Black looks to improve on its eighth-place standing from a year ago at North Ranch Country Club. Then-freshman Eric Ghim was SDSU’s top finisher at that tournament, tying for 17th out of 82 competitors.

The Aztecs will enjoy a two-week break before co-hosting their lone home event of the season, the 11th annual Lamkin Classic, March 12-13, at San Diego Country Club in Chula Vista. Last season, Abercrombie tied for second place in the South Bay, finishing three shots off the pace to earn Mountain West Men’s Golfer of the Week honors.

A return venture to the Coachella Valley awaits the Scarlet and Black for its next tournament when it competes in the inaugural K-State Bighorn Invitational, March 23-24, at Bighorn Golf Club in Palm Desert, California.

As the calendar flips pages, the Aztecs will partake in their eighth straight journey to the Santa Cruz region for the historic Western Intercollegiate, April 7-8, at scenic Pasatiempo Golf Club before venturing to the Pacific Northwest for the conference tournament.

For the first time ever, the Mountain West Championship will be contested at Gold Mountain Golf Club in Bremerton, Washington, April 20-22, outside of Seattle. SDSU posted its second straight fourth-place showing in 2017 after capturing the league title in 2015. The Scarlet and Black also took home MW crowns in 2011 and 2012.

Should the Aztecs maintain their lofty status among the nation’s top programs, SDSU will likely extend its program record of NCAA regional appearances to 20 consecutive years.

This season's regional championships will be conducted over three days, May 14-16, at six campus sites, including Stockton, California (Pacific); Bryan, Texas (Texas A&M); Norman, Oklahoma (Oklahoma), Columbus, Ohio (Ohio State); Raleigh, North Carolina (NC State) and Kissimmee, Florida (UCF). If the Aztecs qualify for the NCAA finals, they will compete in the national championship series for the third time in the last four years, May 25-30, at Karsten Creek Golf Club in Stillwater, Oklahoma.