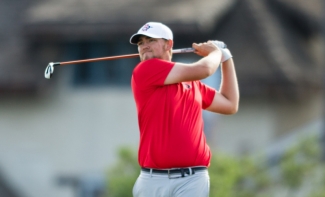 April 7, 2018 (Santa Cruz) - The San Diego State men’s golf team finds itself in second place at the Western Intercollegiate after play was suspended on Saturday during the second round due to darkness. As a team, the Aztecs remain at 6-under through holes 12-13 at the par-70, 6,615-yard Pasatiempo Golf Course.

Waiting out a 90-minute delay due to heavy overnight rains, SDSU finished the opening round in a tie for sixth place with a collective score of even-par 350, before climbing four places in the afternoon. The six-count-five tournament is scheduled to resume on Sunday at 8:30 a.m. PT, with the final round getting underway immediately following the completion of round two.

With its total, the Scarlet and Black is three shots in back of front-runner North Carolina (-9), while Texas (-4), California (-2) and USC (+1) comprise the rest of the top five.

Individually, senior PJ Samiere (Kailua, Hawaii) and sophomore Trevor Norby (Carlsbad, Calif.) are tied for seventh at 4-under with five holes left to play in the second round. Starting on the sixth tee, Samiere opened with a 73, but catapulted 46 places up the leaderboard to his current spot thanks to a whopping seven birdies over an eight-hole stretch on No. 9-No. 16 in the afternoon.

Norby also displayed upward mobility in the second round, moving up from the 11th spot courtesy of eight pars and four birdies, including back-to-back drains on the 13th and 14th greens. The San Marcos High alumnus shot a team-low 69 in the first round, highlighted by five birdies, including an impressive conversion on the par-4, 493-yard No. 2, which ranks as the fourth-toughest hole of the event thus far.

With their efforts, Samiere and Norby remain just four shots behind co-leaders George Cunningham of Arizona and Scottie Scheffler of Texas.

In addition, Puwit Anupansuebsai (Nakhon Phanom, Thailand) sits two shots behind his Aztec teammates in a tie for 13th at 2-under par. The SDSU freshman carded a 70 in the opening round, buoyed by five birdies of his own, to finish the morning session in the 18th position. However, a double-bogey on the 14th green, followed by three bogeys on his final six holes prevented a loftier perch.

Still, Anupansuebsai managed to jump five places in the standings after sinking four birdies against two bogeys in the second round with six holes remaining.

Elsewhere, Pablo Matesanz (Irun, Spain) is tied for 41st at 3-over par after jumping 12 places between the first and second rounds. In his first varsity start of the season, the SDSU senior carded a 73 in the morning that featured just one birdie against four bogeys before logging two more drains in the afternoon, including a successful conversion on the par-4, 391-yard No. 11, which currently ranks as the fifth-most difficult hole of the tournament.

Blake Abercrombie (Rocklin, Calif.) was not as fortunate, however, tumbling 35 places into a tie for 52nd at 4-over with five holes left in round two. The Aztec senior recorded four birdies in the opening round, including a make on his final green, the par-3, 194-yard No. 5, to finish with a 70. Abercrombie began round two with six straight par, but suffered two bogeys and a triple on the par-4 16th, which precipitated his drop.

Rounding out the SDSU starting six was junior Otto Vanhatalo (Espoo, Finland), who finds himself tied for 74th at 8-over. Earlier, the Torrey Pines High product shot a 77 in round one that was hampered by six bogeys and a double.

Day One Results; Second round suspended