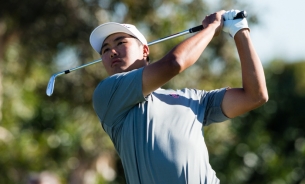 Photo:  Gunn Yang recorded an ace on the par-3 No. 4 Friday during the opening round of the MW Championship.  Courtesy goaztecs.com

April 21, 2017 (Tucson) - The San Diego State men’s golf team owns a share of lead at the 2017 Mountain West Championship after shooting a combined 9-under-par 279 on Friday during the opening round at OMNI Tucson National Golf Club.

With their performance, the Aztecs find themselves tied atop the team standings with Boise State heading into Saturday’s second round on the par-72, 7,194-yard Catalina Course, while UNLV (-7) occupies the third position, followed by Colorado State (-5) and New Mexico (E).

Four of SDSU’s five starters finished the day in the individual top 10, including senior Gunn Yang (Pyeongchang, South Korea), who sits in a four-way tie for fourth after firing a 3-under 69, joining New Mexico’s Andrej Bevins, Utah State’s Tanner Jenson and Boise State’s Danny Hopoi. The Aztec senior offset two double-bogeys on the front nine with a trio of birdies, as well as an ace on the par-3, 170-yard No. 4. Not to be outdone, Yang sank three additional birdies after the turn, including back-to-back conversions on holes 14 and 15.

With his total, Yang remains three shots behind front-runner John Oda of UNLV, who fired a 66 to open a one-stroke advantage over Wyoming’s Ryan Wallen and Boise State’s Brian Humphreys, who each shot a 67 on Friday.

Also in contention are SDSU’s PJ Samiere (Kailua, Hawaii), Trevor Norby (Carlsbad, Calif.) and Nahum Mendoza III (San Diego, Calif.), who find themselves tied for eighth after all three players carded a 70 during the opening round.

Samiere led the Aztecs with seven birdies on the day, including four straight to open his round. The SDSU junior also recorded a successful conversion on the par-3, 247-yard No. 7, which ranked as the second-toughest hole on Friday, before adding two more drains on No. 13 and 14. However, three bogeys on the back nine and a double-bogey on the par-4 18th prevented a loftier perch.

In his first MW Championship start, Norby, a redshirt freshman countered three bogeys with five birdies of his own, including three on his final four holes. The San Marcos High alumnus was lone Aztec to make birdie at No. 18, which ranked as the most difficult hole of the opening round.

Meanwhile, Mendoza maintained an unblemished scorecard after notching a pair of bogey-4s at No. 4 and No. 7. The Aztec senior finished strong with nine pars over his final 11 holes to go with back-to-back birdies at No. 15 and 16, which gave him four for the day.

The SDSU delegation also included Blake Abercrombie (Rocklin, Calif.) who completed the first 18 holes in a tie for 26th after shooting a 73. The SDSU junior was 1-under for the round after sinking his third birdie of the day at the par-4, 4-404-yard No. 14. However, consecutive bogeys on the 16th and 17th greens derailed his momentum.

The Mountain West Championship continues with second-round action on Saturday when San Diego State tees off with UNLV and Boise State beginning at 9:40 a.m. PDT on hole No. 1. A live scoring link courtesy of Golfstat will be available on GoAztecs.com throughout the tournament.